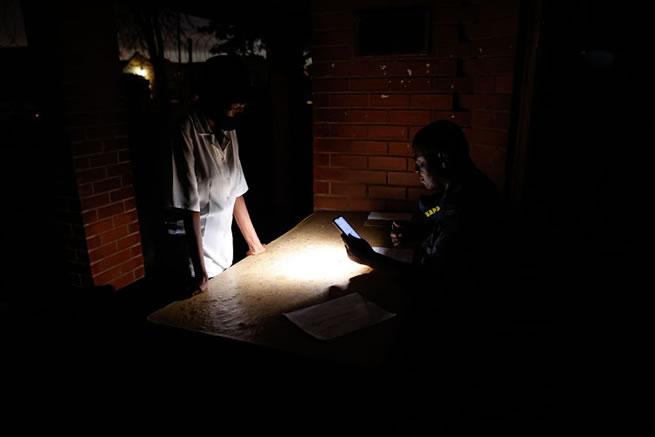 Officers working at the Mabopane Terminus police station in Tshwane are living in fear and have to rely on torches from their cellphones for light as their station has been without electricity for two weeks.

Every night, police officers use their cellphones to get light in order to open dockets and do other administrative duties. The station's back-up generator and landline phone are also not working while the rest of the township has electricity supply.

So bad is the situation that management decided to move detainees from the cells to other police stations as it was a risk keeping them in dark cells.

Since losing power, no fax, computer or printer works at the police station.

One officer, who did not want to be named, said they have three cellphones which they use to communicate on operational matters. However, no member of the public can directly call the police station to alert them of an emergency.

Another officer described the situation as unbearable.

“It is tough, but we have to do our jobs. Our lives are at risk here. Anyone can come and attack us. We know that there have been attacks on police stations in other provinces, but we are expected to work under these circumstance. It is really unacceptable,” he said.

Rose Khutsoane chairperson of the community policing forum at the station said their biggest concern is the safety of the officers.

“Seriously, their lives are in danger. Sometimes there are female officers working at night at the station who can be held at gunpoint. Even with the male officers around, the place is really unsafe. Also, it is unacceptable to see police opening new dockets using their phones at night. As the community we are really not happy with that situation,” Khutsoane said.

Attacks on police stations have become common in other provinces.

In November, armed gunmen stormed a police station in Malamulele, Limpopo, and ordered police to unlock the safe where they took R5 rifles, 9mm pistols, shotguns and an undisclosed amount of ammunition.

Afterward, the group then robbed a nearby food outlet and a petrol station.

This incident prompted the SA Police Union to call for attacks at stations to be declared crimes against the state.

The cause of the loss of power is not known at this stage.

Eskom provincial spokesperson Amanda Qithi said on the power utility system there was no problem in terms of supplying the police station.

“No fault has been reported from the police station and we do not have any supply interruption that is affecting Mabopane. These particular customers, if they have a fault, they need to log it because it is an isolated fault. In our system there is no interruption from our side,” she said.

Police spokesperson Capt Mavela Masondo conceded to the lack of electricity, which Sowetan has witnessed, but said services have not been affected.

“The lack of electricity at the police station has not hampered service delivery, the Community Service Centre is functional, there are emergency lights that are switched on to enable the members to work at night. The matter has been reported to the relevant authorities and they are working on restoring the electricity,” he said.