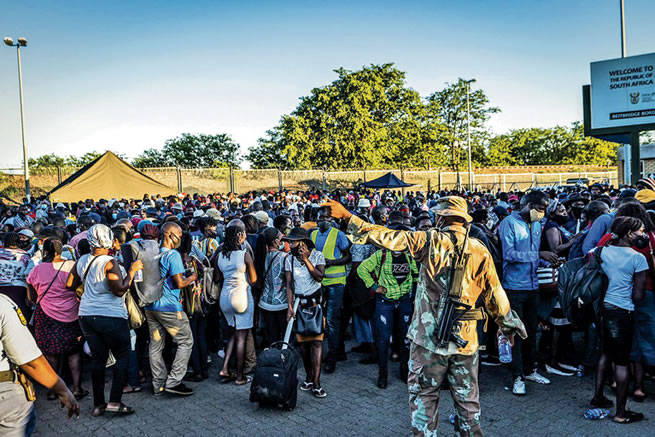 Over 700 people have been arrested from Sunday to Monday in their attempts to enter the country illegally.

The successful initiative that was spearheaded by the Home Affairs minister Aaron Motsoaledi, has been monitoring the traffic jam at the Beitbridge Border Post in Musina, as people are coming back from festive holidays.

Motsoaledi said the border jumping at vulnerable parts of the inadequate fence still remains a major concern for the country.

As the law enforcement was tightened up in some parts of Gauteng, the operation in Daveyton, east of Johannesburg saw various Taxies found smuggling undocumented people from Mozambique into the country.

He unpacked illegal activities that the department and with the assistance of the police discovered: “The taxi driver with a passport carried people with no documents whatsoever.”

“When they approach the border, he’d stop the car, the people will go out and run around the border and look for an area where they can jump and then they would reconnect on the South African side.”

Motsoaledi confirmed on Tuesday that in the last two days, at least 700 people were apprehended and deported.

“On Monday, 437 people were arrested and sent back because they were coming here illegally without documentation.

“And on Sunday, 337 were also arrested and sent back to their home country,” revealed the minister.

The minister said that the border management authority will have to be reinforced to address illegal entry into the country.

Since festive holidays ended past Saturday, there has been heavy traffic on the roads, as people return home with others heading back to their respective work places.