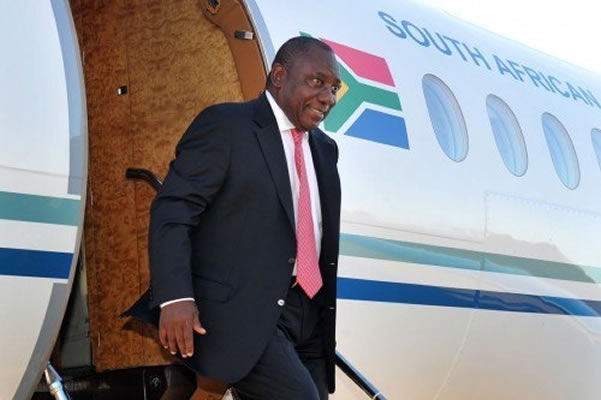 President Cyril Ramaphosa has indicated that he would step aside from the implementation of the Zondo commission of inquiry recommendations should he be implicated in allegations of state capture.

Speaking on Tuesday at the handover of the report, Ramaphosa's undertaking followed a failed legal bid that sought to block him from receiving the first part of the report because he was implicated.

On Tuesday evening, acting chief justice Raymond Zondo, who chaired the judicial inquiry into allegations of state capture and corruption over the past four years, finally handed over the first of three parts of the report to Ramaphosa at the Union Buildings in Pretoria.

After a delay of more than an hour, Zondo arrived at the Union Buildings flanked by his security detail and the commission's secretary Prof Itumeleng Mosala, with a media contingent waiting inside and outside.

Part one of the state capture report includes three volumes that focused on allegations relating to SAA and its associated entities, the Gupta-owned The New Age and the alleged use of millions of rand in public funds by various departments and state-owned entities to advertise in it, and the evidence in relation to the SA Revenue Service as well as public procurement in SA, respectively.

Ramaphosa said he did not know what the report findings and recommendations were, including about himself, but hinted that he would step back from handling its implementation if he was fingered in it.

“I don’t know what the report will be saying about the whole variety of people including myself, so one has to receive, to read the report first to be able to see whether one is conflicted or not. And my own history is that, where I am conflicted, I have the sense of integrity to be able to step out of the way and say I am conflicted on this, and I have ingrained that in the way I do things all the time,” he said.

Democracy in Action (DIA) had lodged a bid before the high court in Johannesburg to interdict Ramaphosa from receiving the report, arguing that he was conflicted due to his implication by some of those who testified before the inquiry.

DIA head Thabo Mtsweni told the court that Ramaphosa had been the head of the ANC’s deployment committee and played a role in the appointment of some of the leaders of state-owned enterprises who were central figures in state capture.

“There is evidence that was led before the commission that the third respondent [Ramaphosa] was the shareholder at Glencore, which was the contractor to Eskom and was central to the state capture commission,” Mtsweni said.

Ramaphosa said while his administration would first apply its mind to the report and develop an implementation plan for the recommendations, law enforcement agencies were free to immediately act on those implicated by the report.

He said the implementation would be submitted to parliament before the end of June, which he said was an expression of commitment to transparency.

“People of our country will see for themselves whether we are hiding anything, up to and including people who may well be named and implicated. All that is now going to be out in the open,” he said.

While Ramaphosa said it would take a few hours to release the report, it had not been put up by the time of publication.