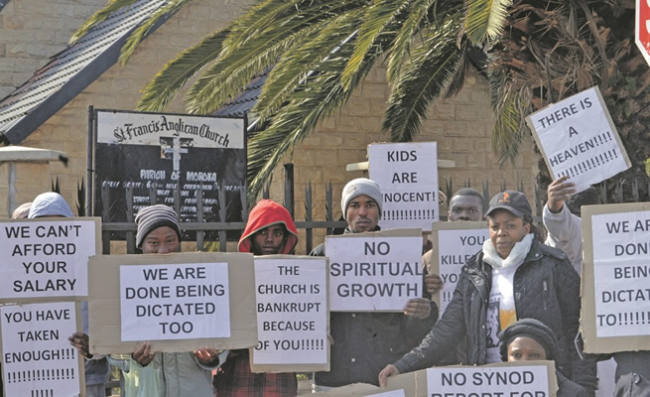 THE priest from St Francis Anglican Church in Rockville, Soweto has overstayed his welcome.

Congregants want nothing to do with him, saying he is a dictator.

His angry flock protested outside the church yesterday and later handed a memorandum to church leaders.

Mpho Molefe (56), who has been with the church for over 17 years, told Daily Sun she wasn’t happy with how the priest operates.

“He treats poor people like they are nothing. Rich people are the only ones who matter because they buy attention. When did the church become a money making scheme?”

Mpho said the priest refuses to baptise children whose parents cannot pay R750 for his services.

“Parents used to pay a monthly pledge and R200 for baptism. He is now using it to make money. He tells us to go house to house looking for children who are not baptised and bring them to the church.”

One angry protestant was holding a placard written "Go to hell Mfundisi".

“Many people want to speak up but are afraid of him. His term ended at the end of June but he is still running his show. What kind of priest disrespects elders and doesn’t visit the sick?”

Bibi said the church’s youth had given up and left for the charismatic churches.

Archdeacon Kenneth Xinwa said he was aware of the complaints. “I was sent there by the bishop to receive their memorandum.

“We understand their frustration but must follow the rules. I will take the memorandum to the Anglican Diocese and they will get their response by Sunday,” he said.