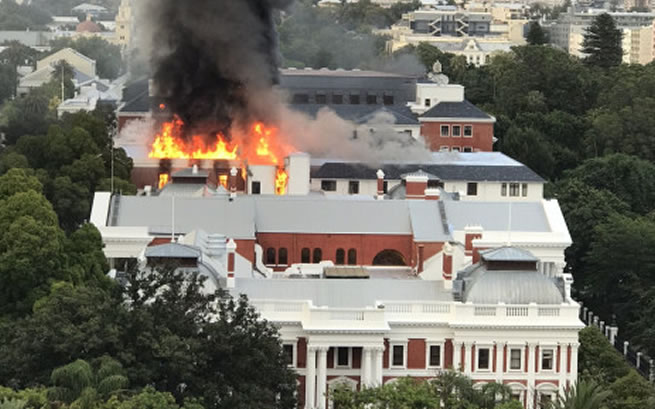 The 49-year-old suspect faces charges of housebreaking, theft and arson and will also be charged under the National Key Point Act.

A man linked to a fire that gutted parts of Parliament is due to appear in the Cape Town Magistrates Court on Tuesday.

The 49-year-old suspect faces charges of housebreaking, theft and arson and will also be charged under the National Key Point Act.

The Hawks said that the suspect was allegedly caught with suspected stolen property after he gained entry to the parliamentary precinct unauthorised.

The Hawks' Nomthandazo Mbambo: "He was spotted by members of the protection and security services when they noticed the building was on fire. The matter was referred to the Hawks as crimes against the state team for further investigation. The motive for his actions is subject to investigation."

It took fire crews at least 5 minutes to respond to the fire after receiving a call shortly after 6am on Sunday.

When firefighters arrived, the sprinkler system had not been triggered.

Minister of Public Works Patricia de Lille said that according to a report that she received, a fire drill was conducted shortly before Parliament closed late last year, which was a standard maintenance process to test whether the sprinklers were in working order.

"They did the drill and everything was in order. What was discovered was that somebody has closed off one of the valves and so there was no water. So we are getting in information piece by piece," Minister De Lille said.

When asked about more clarity about the suspect, De Lille said there was no place for speculation and that the law must now take it course as the Hawks handled the investigation.

"What is only sad is that Parliament is the House of our democracy where our elected members of Parliament come together to hold the executive to account and as the president has said, the work of Parliament will go on," De Lille said.

This year's State of the Nation Address (Sona) has been scheduled for 10 February and National Assembly Speaker Nosiviwe Mapisa Nqakula said that they were determined to ensure that Sona goes ahead despite this major setback.