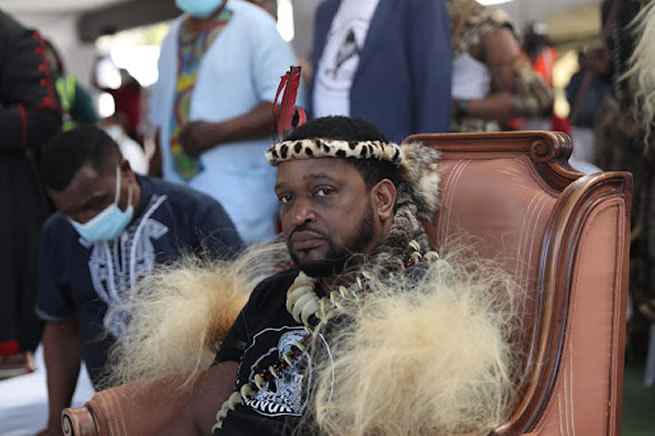 The brother of late Zulu King Goodwill Zwelithini has claimed in court papers that the disputed heir to the throne, Prince Misuzulu Zulu, is being installed as monarch at a secret coronation to be held this Friday.

Prince Mbonisi Zulu has launched an urgent application in the Pietermaritzburg high court, which he says is supported by some members of the royal family, seeking an order to stop the alleged coronation, knowledge of which came “through the grapevine”.

Prince Mbonisi wants an order stopping the ceremony until the outcome of two related court applications, set down for hearing on December 7, in which Queen Sibongile Winifred Zulu, the first wife of the late king, is seeking to lay claim to half his estate through her marriage in community of property.

In the second application, her daughters, princesses Ntandoyenkosi Zulu and Ntombizosuthu Zulu-Duma, are challenging the authenticity of the late king’s will, claiming his signature was forged.

They also dispute that the late king, who died on March 21, wanted Misuzulu kaZwelithini, the eldest son of his third wife, Queen Mantfombi Dlamini-Zulu, to take over the throne.

The king took six wives. Queen Dlamini-Zulu is said to have had elevated status because she was from Swazi royalty. She was appointed regent during the time of mourning, but passed away on April 29, paving the way for her eldest son to take over the throne.

Prince Mbonisi, in his urgent application, wants the court to ban further steps which may be construed as recognising Misuzulu as king.

He said he and others “learnt through the grapevine” about the coronation.

He said because of division in the royal house over who should succeed, there was no trust among members.

“I, together with others, met to discuss the veracity of the rumours. We consulted our attorneys and sent letters to [Misuzulu and Prince Mangosuthu Buthelezi] asking that they either confirm or deny what was going on.

“They did not respond. I submit this supports the rumours.”

He said if the coronation went ahead it would prejudice the outcome of the pending court applications and “further divide” the royal family.

Buthelezi, who is traditional prime minister of the Zulu nation, is opposing the application and has denied that a coronation is being planned.

In his affidavit, he said only the royal houses of five reigning (now deceased) kings have any recognition.

Prince Mbonisi and others had no right to call meetings and make decisions because he was not part of the “core structure” of the royal family.

Buthelezi said he had publicly stated that there would not be a coronation until the court cases had been finalised and that Mbonisi was “rumour-mongering”.

“The process leading up to a coronation has five tiers. A ceremony cannot occur before a recognised certificate is published in the government gazette and the premier arranges the ceremony,” he said.

It could be that Prince Mbonisi had become confused by a planned private family traditional ritual in which the king is “ushered into the kraal” where ancestors rest, he said.

“I underscore the event is purely a private matter. It does not in any way proximate a special ceremony arranged by the premier to affirm the appointed and recognised king. It is one of the five steps I have alluded to,” he said, asking that the application be dismissed.

The two applications, to be heard on December 7, are also being opposed by Buthelezi.

He said Prince Misuzulu’s claim to the throne was a foregone conclusion, legally and culturally, and has denied the will is a forgery.

He argued that Queen Sibongile Winifred Zulu cannot, 50 years on, “wish away” the king’s other wives and that the civil marriage, concluded after the traditional ceremony, was “irrelevant” and an “exercise in futility”.

Buthelezi has come under personal attack. The queen and princesses said he has no legal standing to get involved in either matter and, in essence, is meddling in another man’s affairs.

They argued that his position as “prime minister” of the Zulu nation is not recognised by the Traditional Leadership and Governance Act, he is not a beneficiary of the disputed will and the issues regarding the validity of the late king’s marriages are “only the concerns of the queens”.