Home General News Father of man who was found with human body parts in fridge... 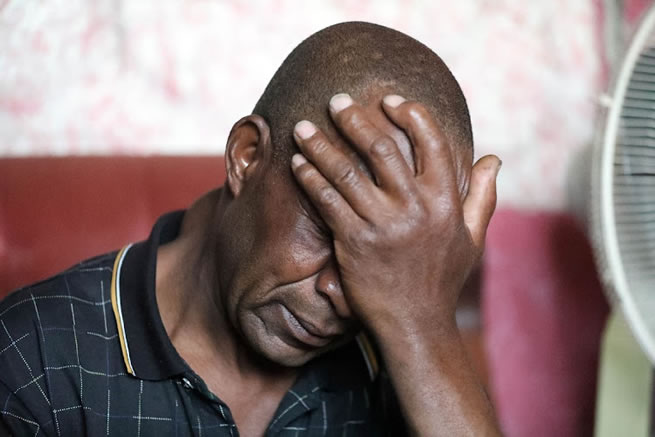 In a dimly lit room of a four-roomed house in the belly of White City, Soweto, Paul Hlabangwane buried his face in his hands.

“If he is guilty, then he deserves to be punished,” said Hlabangwane.

Hlabangwane had caught wind of the grisly discovery of body parts in Protea Glen, about 30 minutes away from his home, but little did he know that his son was the man arrested for concealing human remains in his fridge.

Flavio, 26, is scheduled to appear in the Protea magistrate’s court today on a charge of murder.

It will be the first time the father and son will see each other in years. But it will be far from a happy reunion.

“I will be in court to see and support my son as far as I am allowed to. The law needs to take its course because if he is guilty of doing what he is being accused of then he needs to be punished.”

Hlabangwane drifts off and recalls how he used to take his son to creche every morning, when their talks would be centred on his future.

“At that age he was a child but he used to say that he wanted to go to university. That was his dream,” he said.

Despite living a few blocks away from his son’s home, the pair met on rare occasions.

“His mother and I separated in 2012 when he was in matric. That was the last time we engaged directly. I had lost my job and things were not going well. Since then until he graduated we met at the open field across from my home,” he said while pointing through the window of his living room.

“Even though he lives nearby, I could not go to his mother’s house, so I would call him and we would meet outside. If I had R100 I would make sure that I give him R50 because that is all that I had,” he said.

Hlabangwane is not shy to explain the strained relationship he had with his son lately.

“I have been hearing that he is married. He once called me and asked me what my father’s name was because he wanted to name his son after his grandfather but he did not tell me he was married, especially to his cousin,” he said.

Last week, Flavio’s mother, Grace Hlabangwane acknowledged knowing her son’s partner but neglected to mention that it was her niece.

However, when our news team returned to her home three days later, Grace, who was in the presence of two police officers, instructed one of her daughters to refuse the team access to her home.

Though not confirmed by the police, the deceased’s family admitted to knowing the identity of the woman whose body parts were found in Flavio’s deep freezer.

On Wednesday, police found a head suspected to be the woman's.

Police spokesperson Col Brenda Muridili said the head, along with the arms and legs, were taken to the forensic laboratory to confirm the identity of the deceased.

When we contacted the woman's father and even though he acknowledged that his daughter had perished, he said he could not comment at this stage and would allow police investigations to unfold.

A close family friend, who spoke to Sowetan yesterday and asked not to be named, confirmed that the deceased and Hlabangwane were married despite being cousins.

The family friend refused to speculate about the motive for the murder but said they were privy to Hlabangwane’s family dynamics.

“We know what was happening with the deceased and what led to her and Hlabangwane being married. Although we are not sure how long they were married, we know that there was something that was happening,” said the family friend.

“Right now, the deceased’s family – her sibling and her father – are still coming to terms with what has happened even though the police have not confirmed the status of the DNA results.”