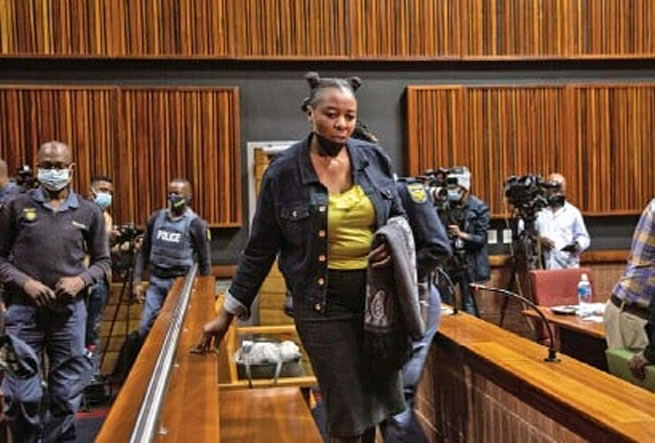 The startling details were revealed by Mabunda in an interview yesterday.

He said Ndlovu, who was found guilty and sentenced to life for killing five relatives and her boyfriend for insurance payouts, had an insatiable appetite for murder.

Mabunda, who hails from Giyani in Limpopo, said Ndlovu planned his and a colleague’s murder while awaiting trial at the notorious Sun City prison in the south of Joburg.

“She also used one of the key witnesses to get close to me. You must note that she tried to bribe me first, and when all that failed, she then decided to [plot to] kill me,” he said.

“I had to be cautious, and I also had to make sure that my family was safe as I had to limit my son’s movements while looking over my shoulder. I didn’t want to take chances because I realised that she was an evil woman who would do anything to take me out.”

Mabunda, who said he had tried unsuccessfully four times to get into the police services, got involved in the case in 2015 while he was an acting station commander at

Olifantsfontein police station. The former security guard said the case has taken a heavy toll on his family and his social life.

“When I started to investigate this case, I refused to work with other people because I didn’t want to compromise it. I felt I needed to fully commit myself towards solving those murders committed by Rosemary. The first time I saw her face was in 2015, when she came to the police station to request my colleagues to sign her insurance claim documents after she had killed her boyfriend, Maurice Mabasa.

“After I had picked up that there was something fishy with her insurance claims, based on my investigations that were linking her to other unsolved cases, I contacted the insurance company to stop the claim, and she came to the police station fuming, telling me that I had no right to stop her claim,” said Mabunda.

Mabunda added that while the case was still on, the prosecutor, who worked on the case, had to leave the case because her husband died and she later became terminally ill.

“Having to deal with not working with the prosecutor who started with me really put me under immense stress. But a new prosecutor, advocate Riana Williams, came through and she told me that we are going to get a successful conviction. I never doubted her because I believed that she knew her story and she told me that I shouldn’t give up as she was here to work with me.”

Judge Ramarumo Monama sentenced Ndlovu to life in prison for each of the six counts of murder on Friday. He further sentenced her to additional

five years for defeating the ends of justice, and 10 years for each of the four counts of fraud.

witnesses after the sentencing proceedings, was also sentenced to 10 years imprisonment for each count of incitement to commit murder and 10

years for the attempted murder of her mother.

She pocketed R1.4-million in insurance claims related to the killings.

Monama blasted Ndlovu for not showing remorse for killing her relatives in pursuit of wealth.

However, Ndlovu extended an olive branch to Mabunda after her sentencing.

“On sentencing day, Rosemary said that I should be proud of myself for doing my job. She said that she was not angry with me because she understood that I was just doing my job.”