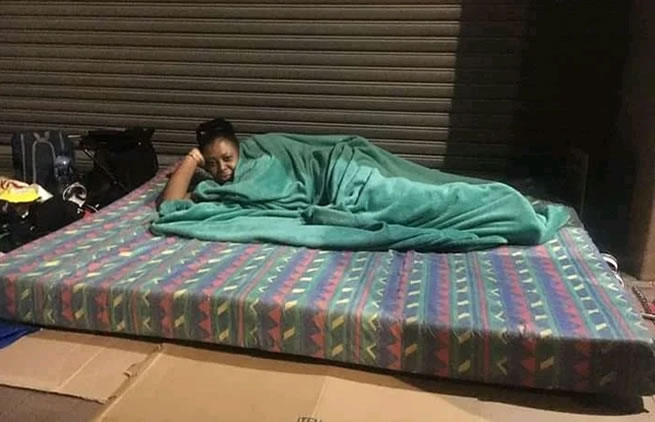 A group of artists have been sleeping outside the Department of Sport, Arts and Culture offices in Tshwane.

Their sit-in started on Friday, 22 October and it is still going on.

In one of the video clips, Eugene Mthethwa who is also part of the sit-in, can be heard saying Mthethwa should resign.

On Sunday, 24 October Sbongile Mngoma, one of the artists who are camping outside the department, wrote an open letter to the minister.

It reads: “Day 3 DSAC camp out. Dear Minister Nathi Mthethwa. Please report to DSAC urgently. Amahobo aseDSAC are waiting for you there. The urgent matter is your pending resignation. As you know, it’s long overdue. You are now serving extra time that nobody needs from you. Contrary to your warped idea of Arts and Culture, one in your position does need to have an understanding of the sector. Creatives can no longer be subjected to your ineptitude, arrogance and outright idiocy. Now do us all a favour and drop off your resignation letter and disappear into the darkest hole. No one should ever be subjected to your uncaring ways. Not another taxpayer cent should be spent on you. You have certainly overstayed your welcome. Not that you were ever welcome. Now, do the right thing. We know you are unfamiliar with the concept but that’s no excuse to stay. Bugger off. Kwanele,” she said.

“I am not sure how long we are going to be there. All I know is we will camp there until Mthethwa and his officials are taken out or he resigns,” Sbongile had said.