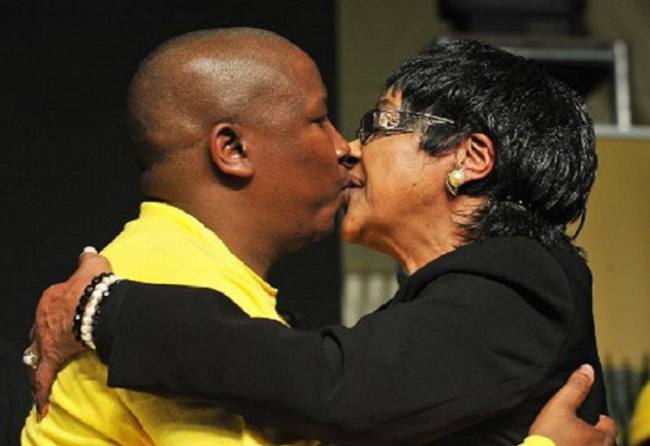 The daughter of the late struggle icon Winnie Madikizela-mandela and her family snubbed an invitation from the Free State government to attend the renaming ceremony of Brandfort after her mother, forcing the event to be cancelled at the 11th hour.

Celebgossip has learnt that Zenani Mandela-dlamini, born from the marriage between Madikizela-mandela and South Africa’s first democratic president Nelson Mandela, chose to attend the EFF manifesto launch in Johannesburg after turning down the ANC.

Madikizela-mandela spent many years in Brandfort after she was banished by the apartheid government in 1977.

The much-vaunted event was billed to take place last Sunday, the same day EFF leader Julius Malema and the red berets launched their manifesto at Ghandi Square in central Johannesburg, where they unveiled that their new headquarters would be named after the celebrated anti-apartheid stalwart.

In a statement issued by the Free State department of sports, arts, culture and recreation dated September 22, the unveiling was slated for September 26 at the local sport precinct next to the

“The date is also most appropriate for the honour of this nature to be posthumously bestowed upon Mama Winnie Mandikizela-mandela as this is her birth date. The event is expected to be graced by the honourable premier of the Free State Mme Sisi Ntombela, the Mandela family, close associates of Mama Winnie Madikizela-mandela who associated with her during her stay in Brandfort, and other dignitaries,” read the statement.

An invitation was produced for the event bearing the faces of Ntombela and MEC Limakatso Mahasa.

It also contained details of the ceremony.

But the event had to be called off as none of the Mandelas pitched for the event. Instead, Zenani delivered a fiery speech at the EFF rally, in which she took a dig at the ANC.

Mahasa confirmed that they had invited the Mandela family and that their absence forced the ceremony to be cancelled.

“I’ve been in several talks with Mama Zenani’s son that we would like to do a hybrid event. He was okay at first and they agreed to honour the invitation, and they agreed with the proposed date we placed on the table,” said Mahasa.

She said that the family had told them that they had been planning “something aside” and would send some representatives. “We are still waiting for them to tell us which date will work best for the event to get under way.

“Everyone follows what they think is best for them but in my capacity, I understand that she attended the EFF’S manifesto as it’s closer to her home, as she didn’t want to leave her home,” she said, expressing her and Ntombela’s disappointment that the event did not go ahead.

But sources close to the family said Mandela-dlamini did not approve how the Free State government went about organising the event.

A source said the snubbing of the event was also informed by the anger the family has regarding how the ANC has treated them, their late mother and her legacy.

“Zenani is angry with the ANC,” the close associate said.

An official in the Free State government said they were shocked to see Mandela-dlamini speaking at the EFF manifesto.

“We were expecting her in Brandfort,” he said.

A member of the ANC Women’s League in Lejweleputswa, the region where Brandfort is, said they waited for Zenani to no avail.

The refurbishment of House 802 in Brandfort – where Madikizela-mandela was banished in May 1977 – has been marred by delays.

The department of Arts and Culture took a decision to turn the house into a museum in 2011, seven years before Madikizela-mandela died, aged 81 in April 2018. The house is yet to open its doors.

At the EFF event, Mandela-dlamini, who is Ambassador to the Republic of Korea, thanked the organization for honouring her mother and keeping her memory alive by not only naming a building after her but also using the occasion of their manifesto to pay tribute to the late ANC stalwart.

“I flew all the way from the Republic of Korea to be with you on my mother’s birthday.

“My family wants me to tell you how much we appreciate the EFF in that it has never and will never forget my mother,” she said.

“You, the EFF, have been one of the few to continue remembering, honouring and embracing the memory of my mother, the mother of the nation, which I and my family acknowledge,” she said.