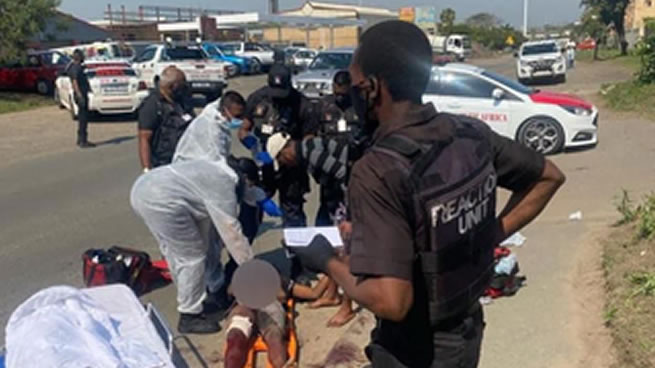 A 13-year-old schoolboy who had allegedly robbed a girl of her cellphone in Phoenix was shot by a motorist who came to the victim’s aid.

The incident occurred in Phoenix on Thursday morning.

Paramedics from Reaction Unit SA (Rusa) responded to calls of a shooting incident in Fernham Drive in Phoenix where they found the teen in a critical condition.

He had been shot in the thigh and was bleeding excessively.

Prem Balram, the director of Rusa said a 12-year-old-boy who was assisting the injured teen told his officers that they were both grade 10 pupils at a school in Ntuzuma.

“He went on to explain that his friend had robbed a scholar of her cellphone on Ferham Drive and was fleeing the scene when four men in a white VW Polo fired multiple shots at him. One bullet penetrated his thigh, causing him to collapse. The occupants of the VW Polo retrieved the cellphone from him and left him for dead on the pavement,” he said.

Balram said the boy was stabilised at the scene by medics before being transported to hospital in a critical condition. His officers conducted an extensive search for the white VW Polo, however, no arrests were made, Balram added.