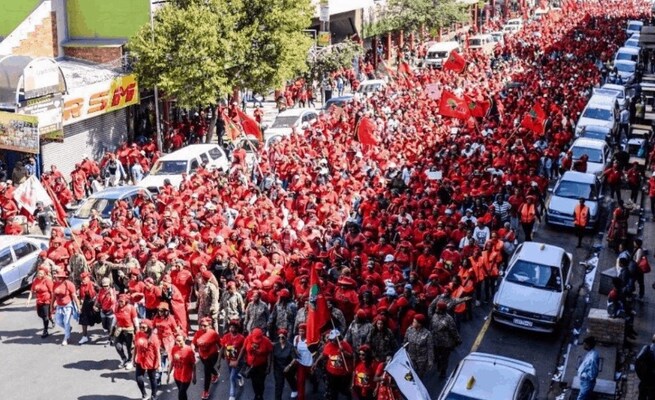 Retail outlet SuperSpar has instituted legal action against the EFF, seeking a court order to compel the red berets to pay R500 000 in damages, after the party allegedly staged an illegal protest in November outside their Musina-based store.

In SuperSpar’s particulars of claim, lodged at the Johannesburg High Court this week, EFF provincial chairperson Jossey Buthane allegedly rallied Musina community members to the store after an alleged shoplifter was allegedly manhandled and injured by the store’s security personnel.

The retailer points out that the incident occurred despite an agreement with the party that it would desist from interfering in labour relations between the company and its employees.

During the morning of Wednesday November 11 2020, members of the first defendant (EFF), fully dressed in their uniforms, with members of the Musina community, arrived at the store of the plaintiff being operated … demanding, unlawfully so, that the store close and not trade.

The papers added that the red berets had embarked on protest action without seeking permission from the relevant authorities.

The document further reveals that EFF members proceeded to verbally abuse staff at the store and chased out customers, which violated a court order the company had obtained earlier in November.

“As a result of the foregoing unlawful acts of the members of the first defendant and the second defendant, the plaintiff suffered a loss of revenue, as well as additional expenses in obtaining additional security and incurring costs of attorneys and counsel.

“At all material times, Buthane acted within the scope of his instructions, on the authority of and in furtherance of the interests of the EFF, which, as a result, is vicariously liable for the actions of its members’ unlawful and illegal conduct.”

Cleaning company Afri Services had obtained an order from the same court to prohibit the EFF from acting as a labour union in disputes that arose pertaining to its employees.

Judge Edwin Molahlehi said in his ruling, which was handed down in July, that the EFF was barred from facilitating any kind of dispute, and as such should be referred to the relevant bodies within the company and, ultimately, the Commission for Conciliation, Mediation and Arbitration.

“The respondent is interdicted and restrained from interfering in the contractual relationship between the applicant (Afri Services) and its employees.”

The ruling also extended to restrain the EFF from publishing any statement that implied that the company was criminally or unlawfully stealing employees’ money.