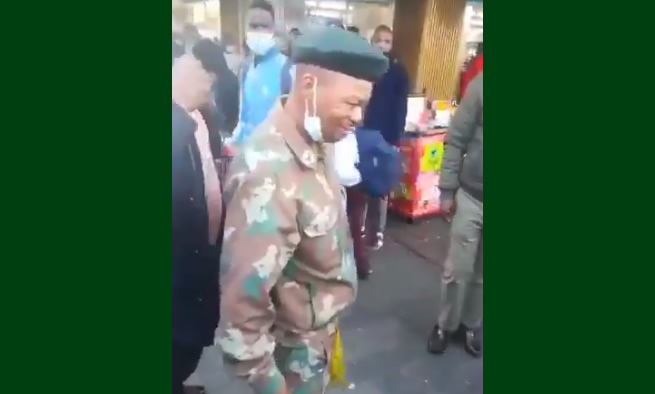 A soldier who was filmed in a drunken stupor in Pretoria earlier this month has been demoted, the SA National Defence Force said on Tuesday.

A video of the officer surrounded by shocked community members while he struggled to stand up straight went viral on social media.

The footage depicted him swaying on his feet and carrying a bag outside a populated shopping centre. A guard guides the man past onlookers to awaiting Tshwane metro police officers.

The soldier was whisked away by the officers.

The army said the officer had been taken to the military detention barracks in Thaba Tshwane.

“Corporal PN Ngcobo, a reserve force member, appeared in a court of a military judge on August 24 and was charged under the military disciplinary code section 45(a),” said Brig-Gen Mafi Mgobozi.

The charge relates to unseemly conduct.

“He was found guilty of the charge preferred against him. He was sentenced to a reduction in rank (one rank lower) from corporal to lance corporal,” Mgobozi said.

We have serious social illnesses and they manifest in different forms

When the video surfaced, the army said at the time the soldier, who was dressed in full uniform, had been missing from work since July 27 and the military had been trying to track him down.

The army described the officer’s conduct as “disgraceful”.

Following the conclusion of his case, chief of the defence force, Gen Rudzani Maphwanya, said no bad behaviour would be tolerated from any of their members.

Maphwanya stressed ill-discipline and criminality by their members would not go unpunished, regardless of their rank.