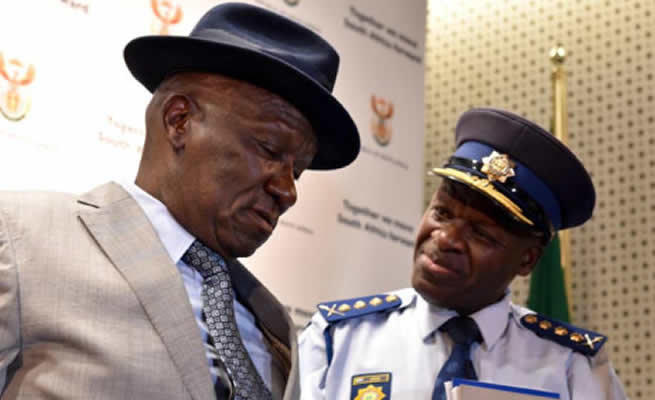 Police commissioner Khehla Sitole was missing in action during last month’s riots in KwaZulu-Natal and Gauteng, according to police minister Bheki Cele.

In an interview with the Sunday Times this week, Cele also said he had received no intelligence reports from the police and Sitole.

The minister admitted police were found wanting during the riots but he said the public and the media had let Sitole off the hook for his lack of action during the riots.


The fact that Cele survived Thursday’s cabinet reshuffle when state security minister Ayanda Dlodlo was axed is a possible indication Sitole may not be in his job for long. Cele has asked President Cyril Ramaphosa to appoint a board of inquiry into the commissioner’s fitness to hold office.

Contacted for his response to Cele’s allegations, Sitole said: “I can’t respond to the Sunday Times or media. The minister is administratively tied up to me and he needs to communicate that to me and hold me accountable. We cannot communicate through the media.”

Police minister Bheki Cele has accused national police commissioner Gen Khehla Sitole of being missing in action during the riots that engulfed KwaZulu-Natal and parts of Gauteng last month.

The Sunday Times spoke to Cele just hours before President Cyril Ramaphosa announced his cabinet reshuffle this week in which he left Cele untouched, a possible indication that Sitole may not be in his position for long.

During the chaos in KwaZulu-Natal, the country’s security cluster, which includes the police, was exposed as being woefully inadequate. Questions were raised over the intelligence-gathering capacity of not only the State Security Agency (SSA), but the police’s own Crime Intelligence unit.

Amid the violence in KwaZulu-Natal that cost the province’s economy an estimated R20bn, Cele engaged in a war of words with his counterpart at the intelligence ministry, Ayanda Dlodlo, who was axed this week. In the wake of the chaos, Dlodlo indicated that she had shared an intelligence report with the police, but Cele strongly denied this.

Even though Cele admits that police were found wanting during the riots, he believes they did manage to protect “some places” and “avoided killing people”. He also feels hard done by, saying that Sitole was let off the hook by the public and the media for his lack of action during the riots.

“When this thing started, in the first three days, I was still in [Covid] isolation. Everybody was asking ‘Where is Cele?’, but I have never heard people asking where is the commissioner. I mean, he has not been in KwaZulu-Natal [the scene of looting] once, and he has not been in Gauteng once, and nobody asked where he is,” Cele told the Sunday Times.

When asked about claims made by sources inside the police as well as his colleagues in the cabinet that the frosty relations between him and Sitole contributed to the police being found wanting, Cele said: “I’m not sure about our relationship and how our relationship should be.

“We met when I was national commissioner and I promoted him. But I’m very sure we’ll never drink coffee, nor wine together.

Cele said that when “things were getting tough with Msholozi [Jacob Zuma]”, he was “placed in KwaZulu-Natal” with Sitole nowhere to be seen.

“I was working from there with people on the ground, [with one of Sitole’s deputies, LtGen Fannie] Masemola. And he [Sitole] was never there … I had to move down to KwaZulu-Natal out of isolation. We could have shared the areas.”

Cele said he never received any intelligence reports from Sitole and that the commissioner had never visited shopping centres in Tshwane, such as Mamelodi Mall, Nkomo Mall in Atteridgeville, or the Alexandra Mall in Johannesburg.

Contacted for comment, Sitole said: “I can’t respond to the Sunday Times or media. The minister is administratively tied up to me and he needs to communicate that to me and hold me accountable. We cannot communicate through the media.”

Late last month, the Supreme Court of Appeal dismissed a bid by Sitole to rescind a high court judgment that found that he and two of his deputies breached their statutory duties by blocking several corruption investigations by the Independent Police Investigative Directorate. The high court judgment is the basis on which Cele has asked Ramaphosa to appoint a board of inquiry into Sitole’s fitness to hold office.

Ramaphosa’s spokesperson Tyrone Seale said: “The president has been engaging with the minister and national commissioner of police on this matter.”

Cele said police were working hard at investigations to find the instigators and those who planned the riots, which include people inside the ANC.

“This is a long walk. The investigations are slowly but surely taking us somewhere … Investigators are moving mathematically, and I know for sure there are comrades who are being investigated but I cannot expand on names and identifications. One major aim was to make people angry and if you find people with no electricity, no water, no food, no hospitals, there was going to be a big problem. This was planned,” said Cele.

Insiders close to Ramaphosa claim the plan, which they believe was hatched by ANC insiders opposed to his government, was to render the country ungovernable and then call for a motion of no confidence against the president.

Ramaphosa this week reshuffled his cabinet and removed two of the ministers in the security cluster, Dlodlo and former defence minister Nosiviwe Mapisa-Nqakula, who had publicly contradicted his contention that the riots were an attempted insurrection. Ramaphosa made radical changes including scrapping the SSA as a ministry and absorbing it into his office. He also announced a panel of experts to investigate the government’s response to the riots and to try and strengthen the security services.