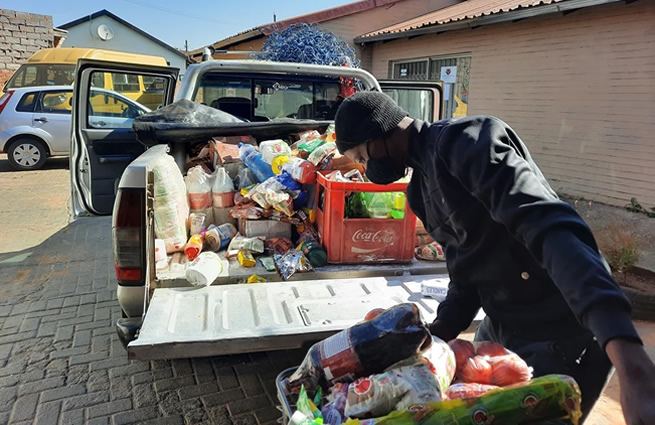 A few cars resisted stopping at the stop-and-search operation. Others attempted to flee after being flagged down, but were nevertheless stopped in their tracks.

In the end, the community of Protea Glen extension 13 in Soweto stopped more than 30 cars that were carrying looted goods and confiscated the items when the occupants of the vehicles failed to produce receipts for them.

Protea Glen is one of the suburbs that experienced looting and vandalism of malls and shopping centres this week. Its mall was completely ransacked on Monday, while another big shopping centre, Sizwe, was looted on Tuesday. The only things left in it were building bricks and a few JoJo water tanks from a building material supplier.

On Tuesday afternoon, however, the community of extension 13 took matters into their own hands, embarking on a stop-and-search operation.The operation started after the community received a tip-off that the looters were making their way to the only petrol station in the neighbourhood.

“That was when we came together as a community and said: ‘Let’s go and protect our garage’,” said Tebogo Ramphora, a local resident.

The crowd of about 30 community members was stationed at two four-way stops a stone’s throw from the garage.

When the operation started at 2pm, the community had the back-up of the police, who arrested five people found to be transporting looted goods. When the police left, the residents carried on with the mission throughout the night, only going home at 7am on Wednesday.

When certain drivers refused to be stop and be searched, building blocks were put in front of their vehicles, preventing them from leaving.

One man who resisted having looted goods offloaded from his car could be heard shouting to the men who encircled him: “Sisokola sonke, why nisenza kanje? Why nizenza ngcono? [We’re all suffering, so why are you doing this? Why do you think you’re better?]”

One of the cars from which stolen goods were confiscated was that of a metro police officer, who had looted construction materials and groceries.

A number of cars pulled off before the building blocks could obstruct them, but the residents caught up with them. Other motorists parked their cars, got out of them and ran away.

Nomthi Radebe, who was part of the operation, said the community refused to have their livelihoods destroyed “in the name of politics”.

"It’s not the politicians who’ll suffer, but us. It will be us who don’t have petrol. It’s us, the people on the ground, who suffer more than anyone else," said Radebe.

Some residents acknowledged that they had acted too late to save the mall, but were pleased that they had helped retrieve some of the stolen goods. The Maponya Mall in Soweto was not looted because residents took measures to protect it.

The community decided that the confiscated stolen goods would be donated to centres housing the needy and vulnerable.