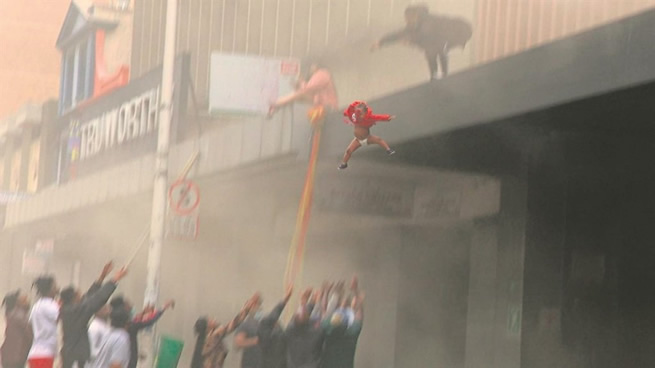 The sight of a baby falling from a tall apartment building was like a horror nightmare that could only end in tragedy.

Simthembile’s heart went out to the parents who were about to lose their little child.

What he didn't know was that it was his child who was about to crash into the street below!

It was only later that Simthembile Matomani (36) discovered that the child he had seen being caught by the waiting arms of the people on the pavement, was his daughter, Melokuhle Manyoni.

The video went viral on social media during the looting spree in KZN this week.

Emotional dad Simthembile Matomani (36) said he had no words to thank residents for saving his two-year-old daughter when the City Life building in the Durban CBD caught fire on Tuesday.

“On the day, my baby’s mother, Naledi Manyoni (26) called me and told me the building was on fire. She was crying and asked me to rush home. I told her not to panic as I was on my way,” he said.

Simthembile said he was trying to be brave for Naledi, but he also feared for the lives of his family.

“I was in the vicinity but navigating the car through the filthy roads delayed me,” he said.
“By the time I jumped out of the car and walked to the flats, I saw people shouting at a woman to keep calm and throw the toddler.”

He said he didn’t think it was his daughter and he was grateful to see Naledi and their other child climbing down a ladder.

“I’m thankful to everybody who assisted. I never thought people could still be so brave,” he said.

Naledi said they stayed on the 16th floor and when the fire broke out the apartment, a receptionist announced they had to get out.

“We started leaving by the stairs because the lifts were not working,” she said.

“As we got to the third floor, smoke blocked our way. That’s when I panicked and called Simthembile.”

Naledi said some men helped them get to the second floor where Melokuhle was then thrown out of the window.

“I blame the looters. They did things that ended up endangering the lives of others,” she said.

Naledi said even though Melokuhle seems fine physically, she might be struggling emotionally.

“Out of the blue she would suddenly say, ‘ngiphose mama’, which means ‘throw me mama’. That’s what the people were shouting at me when they told me to throw her,” said Naledi.

“I think Melokuhle thinks these people were referring to me as mother and from time to time she just says the words even when she’s playing with her toys.”

She also said that at night the child would scream as if she is seeing something scary.

“I think it’s because she cried hard on the day of the incident. She was crying before I threw her,” she said.

“It pieced my heart to throw her but I had to do it because I wanted to save her life.”

She said the little girl likes sweets but at the moment she just plays with them.