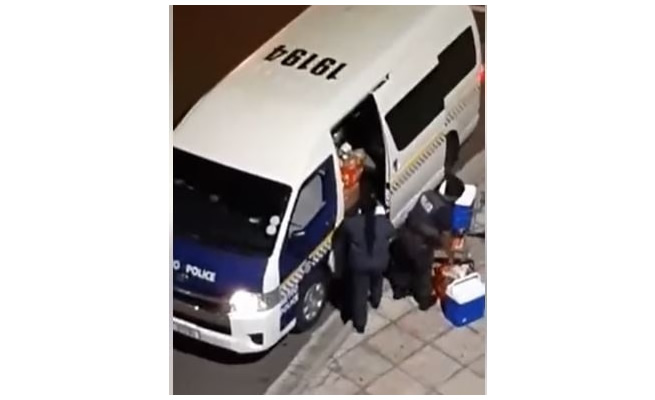 A video of Durban Metro cops loading items looking like booze and a cooler box has se tongues wagging on social media .

People were disappointed that cops, who should be calming the unrest, were part of the problem.

Mandla Mpande said: “The saying goes: If you can’t beat them, join them.”

Fortune Fortune said: “I can only imagine losing your job because of this.”

But eThekwini Municipality put the rumours to bed. Spokesman Mandla Nsele said upon a preliminary investigation, it was determined that the officers were not looting, but rather confiscating goods in their possession and recovering items that were abandoned by those who were looting.

Law enforcement officers 👮🏾‍♂️ in Durban are seen taking part in the looting as protesters take to the streets calling for the release of Jacob Zuma #ShutdownSA pic.twitter.com/PyRgytcX8z

“In terms of police procedure and policy, all items recovered have been listed in a register at SAPS stations, including the goods claimed to have been taken by the police officers. Hundreds of people have been detained with the evidence loaded in the vehicles,” said Nsele.

He said that they would continue with all investigations levelled at cops.

“The city calls on communities to remain calm considering the civil unrest currently taking place, and to listen to the radio and other media to stay informed of current developments,” said Nsele.