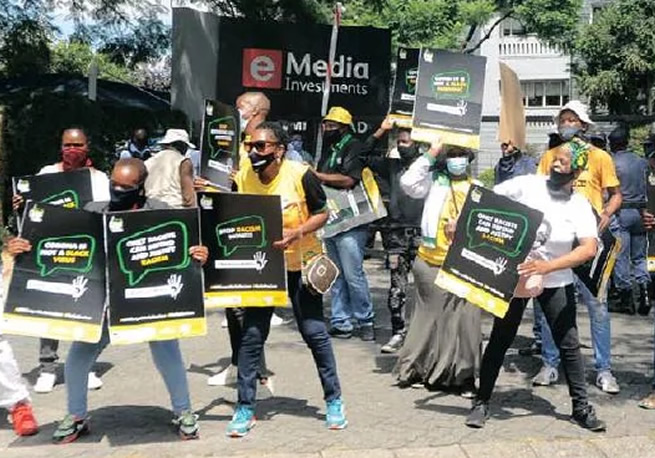 THE EDITORIAL team at eNCA has lifted the lid on allegations of massive news coverage bias by management at the 24-hour news channel.

Zuma was addressing the media for the first time since the Constitutional Court sentenced him to 15 months in prison for contempt of court after he refused to testify before the commission of inquiry into state capture.

The memo was written to management and relevant stakeholders by concerned members of the eNCA editorial staff and titled “The ghost of censorship is back in the eNCA Newsroom! We reject censorship!”.

Ironically, eNCA’s slogan is “No fear. No Favour”.

In it staff members raised the issue of news censorship in the channel’s newsroom.

It reads in part: “We are once again impelled to raise our collective voice, as loudly, as forcefully and as resoundingly as we can muster in rejection of censorship in the eNCA newsroom.

“But nothing could have prepared us for the zero to a hundred full-force nature in which our concerns were to be dramatised and confirmed ‘beyond a reasonable doubt’, in the inexplicable, untenable and objectionable decision to censor the coverage of former president Jacob Zuma’s speech to his supporters in Nkandla on Sunday.

“There is clearly a chain of command that determines which voices are to be snuffed out of the airwaves at eNCA.

“And the chain of command, we submit, does not start even in the most senior position in our newsroom, albeit implementation of unethical instructions arguably gains momentum at this level of newsroom management.

“We submit that it is our reasonable suspicion that the chain of command involves players who ordinarily should be concerned with the running of the eMedia business, including eNCA, but not taking editorial decisions.

“It is ironic that some of the decisions taken end up costing the channel significantly in viewership numbers, which invariably translates to pressure on desk, field, studio and on-air teams to account for plummeting numbers.”

Responding to questions sent by the Pretoria News regarding the allegations, eNCA management acknowledged receiving the memo circulated internally, but refuted claims of censorship in the newsroom.

Managing editor John Bailey said: “The accusations of censorship in the memorandum are without substance. In fact, they are far from the truth.

“eNCA has never censored any news story and never will. Management has taken the memorandum sent by certain staff in the eNCA newsroom very seriously and has already engaged with staff concerning the matters raised in the memorandum. eNCA has a lengthy track record of reporting news independently without fear or favour and in a manner which is free from any form of outside influence. We report and comment on news items no matter how unpopular or controversial they may be.

“Our senior editorial staff and, where necessary, members of its management team, decide on what news matters are worthy of reporting on any particular day and how they should be reported on.

“Even though eNCA did not cover the media briefing live in the traditional manner, the events taking place at Nkandla were widely reported on throughout the day. The fact that any one or more persons did not like the way that eNCA decided to report on the event is irrelevant. The fact of the matter is there was no censorship and eNCA reported on the events in the manner it deemed was appropriate.”

Although the station prides itself as South Africa’s most watched news channel, it is not the first time it has been accused of not fairly giving equal coverage to viewers in recent years.

In 2019 the then head of news Kanthan Pillay was accused of censoring news after suspending journalist Khayelihle Khumalo for tweeting about that year’s EFF conference despite the station’s decision not to continue covering the event.

“As we speak, we as a channel are still dealing with the albatross of the fateful 2019 decision to withdraw our crews from the EFF congress that December.

“To this day, we are unable to help at least that segment of the population that depends on us ‘receive or impart information and ideas’ around the third biggest political party in our country.”

Regarding this, the staff members said: “To this day, we’re viewed with a great deal of suspicion and our bona fides are questioned because of an impulsive, petulant, ideologically and fictionally-loaded decision taken by an individual who was in charge of our newsroom at the time.”

In some of their demands, the scribes asked for the channel to investigate the circumstances that led to the censoring of Zuma’s address and appoint an independent body to look into staff concerns about editorial interference from the board.