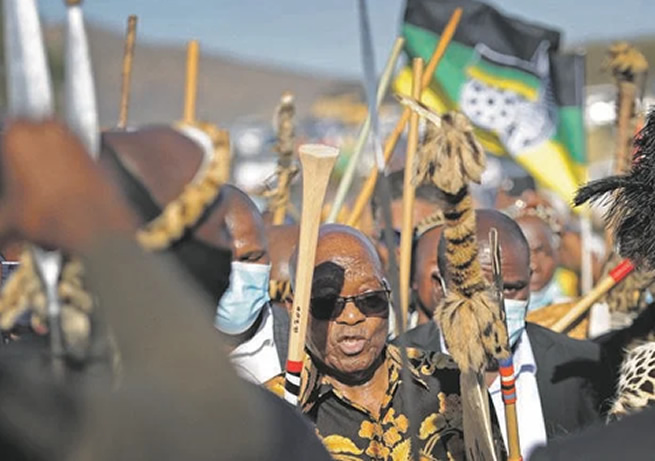 There has been a lot of drama unfolding since the arrest of former president Jacob Zuma on Wednesday.

Several protests erupted across KwaZulu-Natal and were reportedly linked to Zuma being sent to jail. eNCA reported that Zuma’s supporters had blocked part of the N2 near KwaDukuza toll plaza.

MKMVA president Kebby Maphatsoe said the arrest of Carl Niehaus, during a live TV interview yesterday, could have been a misunderstanding as he had not gone to the Estcourt Correctional Centre to mobilise people.


A group of police officers nabbed Niehaus in the afternoon as he was taking questions from the media outside the prison where Zuma is serving his second day of his 15-month incarceration for contempt of court.

Police later issued a statement confirming that Niehaus was arrested for breaking Covid-19 regulations under lockdown alert level 4, which only allows funeral gatherings of not more than 50 people.

“The 61-year-old man is alleged to have convened a gathering of approximately 100 people outside the Escourt prison at about 4pm this [yesterday] afternoon… The suspect was initially warned about the gathering and he was subsequently arrested after ignoring the warning…” said national police spokesperson Brig Vishnu Naidoo.

Maphatsoe told Sowetan last night that he had not heard from Niehaus since yesterday morning until he saw him being arrested on TV.

“He had gone to Estcourt as part of a small delegation that was going to visit uBaba [Zuma] as we were working on something for him. I was shocked when I saw police taking him away from the interview he was doing. I’m still trying to get hold of him to understand what went on.”

Maphatsoe said he did not believe Niehaus broke any law.

Last night, Usuthu Traditional Council chairperson Dr Dumisani Khumalo expelled leader of Amabutho, Zihogo Nhleko over several incidents of misconduct not related to Zuma. This week, prime minister of the Zulu nation Prince Mangosuthu Buthelezi blasted Amabutho, which were led by Nhleko, after they went to support Zuma in Nkandla.

Buthelezi said Nhleko had not been sent to represent the Zulu royal house. “Following discussions, the conclusion was reached that Mr Nhleko’s conduct can no longer be tolerated… Instances of his misconduct started before the death of the late King, His Majesty King Goodwill Zwelithini.”