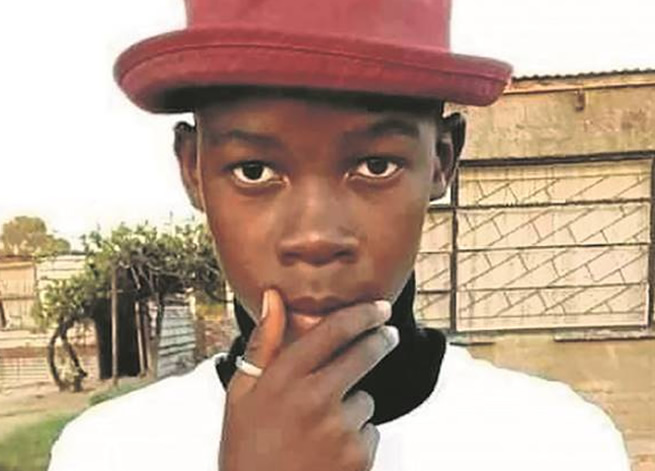 The were best friends and often played games together.

But a game of kurukuru led to the older boy accusing his young friend of cheating.

Lebohang Malgas (15) was allegedly stabbed to death by his friend (12) in Kutlwanong near Odendaalsrus, Free State.

Kurukuru is a game where a tin with a coin is spun and the spinner allows other participants to place R1 bets and guess if the coin is tails or heads. But Lebohang realised his friend was cheating.

Lebohang’s elder sister Zanele (25) said that the last words Lebohang said to his mum were him asking why the house wasn’t yet cleaned.

“My younger brother didn’t like to clean the house. But that day, he surprisingly asked our mum why the house was still dirty,” she said.

“She told him it was their sister’s turn to clean it and Lebohang left the house to play kurukuru.”

She said the winner of the game normally got about R12. But Lebohang allegedly realised that his friend was cheating.

“They fought, but Lebohang got the upper hand and the younger boy went away but he came back,” said Zanele.

“He had a knife with him and stabbed Lebohang in the chest and face.”

Zanele said they ran to him when we heard about the incident.

“The last words my little brother said were: ‘I am tired and thirsty’,” she said.

Zanele said she heard that the friend allegedly bragged about how he was going to kill Lebohang.

“It’s sad that the game ended in death.”

Lebohang’s mum, Grace Matshaya (59), said she was devastated about her loss.

“My son was in grade 9. We never saw his death coming. We depended on his Sassa grant because I am unemployed. We don’t know how we are going to bury him.”

Lebohang’s other sister, Sihle (21) said her brother was just like her friend.

“We used to talk and make jokes every time. Suddenly my brother is gone. The worst part is that we don’t have money to bury him as no one working at home.”

“They gave their condolences and apologised for what happened,” said Zanele.

The suspect’s mum (45) said they were shocked by the incident.

“I am heartbroken by the incident.”

Police spokeswoman Colonel Thandi Mbambo said: “A 12-year-old suspect was arrested and charged with murder. He was released into the custody of his guardian pending his court appearance in the Odendaalsrus Magistrates Court soon.”