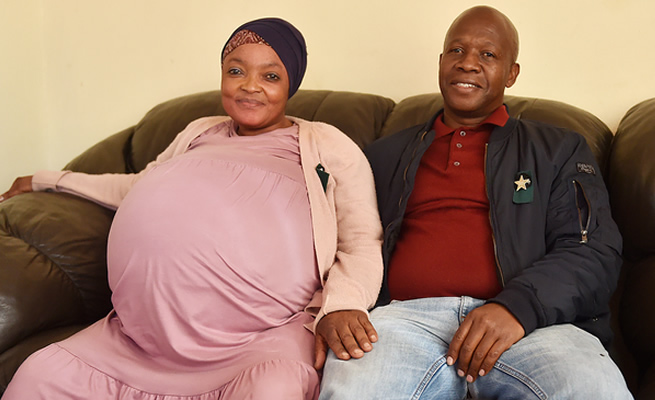 Teboho Tsotetsi, the decuplets father whose wife Gosiame Sithole has failed to disclose her whereabouts and the condition of their babies, has called on members of the public to stop donating money into both their bank accounts until she returns home.

In a police statement on Saturday – in support of a missing person inquiry – Tsotetsi told the police he was concerned about Sithole’s whereabouts and her safety since she told him he was not allowed to see his decuplets due to Covid-19 regulations.

Speaking to Pretoria News after submitting the statement, Tsotetsi urged members of the public and other good Samaritans not to deposit money into his and Sithole’s accounts anymore until his wife and children were back home.


“I appreciate the financial support that we have been getting from members of the public, but I also would like to appeal to the public to stop making money deposits into our accounts until members of the community have seen the babies,” Tsotetsi said in a WhatsApp message.

He added that Sithole had left him with her twins – who are currently living at his mother’s home in Tembisa, Ekurhuleni – and who were equally concerned about her whereabouts and safety. Sithole said while he was taking care of them, they too missed their mother.

On Monday last week, Tsotetsi told Pretoria News that Sithole had given birth to 10 babies at a private hospital in Pretoria on Monday night.

At the time, Tsotetsi said his wife had told him she delivered the decuplets – seven boys and three girls – 29 weeks into her pregnancy. However, the doctors and nurses said no visitors were allowed, he added. Tsotetsi said he had seen his heavily pregnant wife for the last time on Sunday night when he accompanied her to the Esangweni Clinic in Tembisa, after she complained about labour pains.

Almost a week after Sithole repeatedly failed to tell him where she was, Tsotetsi said he gave the police a statement in support of their inquiry on Saturday.

The inquiry came after Tsotetsi’s family members opened a missing person case at the Tembisa South police station on Thursday.

In his statement, Tsotetsi said he had received a WhatsApp message from Sithole shortly after midnight on Monday. This was after she told him earlier that she was at Mediclinic Medforum Hospital and that her operation was scheduled for between 6pm and 8pm that night. “On June 8 2021at 00:02am, I received a WhatsApp message from my girlfriend: Gosiame Thamara Sithole, informing me that she has given birth to 10 babies. At 00:30am she informed me that they were at the Medforum Hospital. She then informed me that no physical visits are allowed at the hospital. I subsequently insisted that, as a father, I would like to come to the hospital to see our newly born children,” Tsotetsi’s statement said.

He said that on Friday, Sithole informed him that, at her request, Mediclinic Medforum Hospital had moved her to the lodge facilities of the Steve Biko Academic Hospital (SBAH) a day earlier. “Having requested her to forward me the physical address of the lodge, she forwarded the location being: Tshwane District Hospital, Dr Savage Road, Pretoria. On Friday, June 11, at 16:24, out of concern for their whereabouts, I sent her a WhatsApp message reading as follows:" Hi baby, like I said, I went to seek the lawyer's help for being harassed by the police. They say they are investigating a case of a missing person because your whereabouts are unknown. I am currently with her, and have explained to her that I don't know where you and the babies are, but that I had an arrangement to meet today but couldn't because we had to see the lawyer for our safety. She has advised me that I should not go and see you as I had been tracked by the police, and If they get hold of me I will be arrested as I am a suspect now because I am the last person to see you. I really needed to see you but my priority is our safety. Please forward me your picture and the pictures of our babies. At 17:03, she sent me the following location of her whereabouts: "Tshwane District Hospital, Dr Savage Road, Pretoria.”

He added: “I confirm that since she informed me that she delivered 10 babies at the Medforum Hospital, I made several attempts to pay them a visit at the hospital to no avail. I reiterate that she told me that no visitors are allowed and as a result I could not go to the Medforum Hospital and/or the Steve Biko Lodge facilities. Accordingly, I do not know Gosiame Thamara Sithole's whereabouts and have not seen her since she left home on Sunday June 7. I have been requesting her for full particulars of the hospital where she's admitted together with the photographs of the babies. She has since forwarded me a picture of a child which she claims is one of the babies.” Tsotetsi shared WhatAapp messages of his communication with Sithole since Sunday last week. In one of the messages sent to Tsotetsi at 02:39 on Monday last week, Sithole said a Mediclinic Medforum Hospital medical team of “4 doctors and 2 gynecologist (sic) and 5 nurses” were involved in her delivery. Sithole said she gave birth 29 weeks into her pregnancy. She added that she was in pain because she delivered her babies “5 normal 5 s”.

When Tsotetsi asked her why she was still awake in the wee hours of the morning, Sithole complained about pains, saying she was desperately ringing the bell for attention because she needed painkillers. Sithole further told Tsotetsi in another message that she had yet to see her babies because the doctors and nurses told her no visitors were allowed.

She added that they advised her to wait until she felt better, and to keep a low profile because the media were looking for her.

In another message, Sithole said the lodge was inside the Steve Biko Academic Hospital.

It accommodated mothers who gave birth to “premature” babies. Sithole said she was told that accommodation had been arranged for her at the lodge. She was not told who made the arrangements.

Once she was moved to Steve Biko’s lodges section, Sithole added, she was kept away from other mothers of stillborn children because the doctors and nurses said the media were looking for her. “We have been put in a safe and private room because the babies are too small. I am also feeling weak and stressed. The babies are in the ICU. They realised that I am not right and have now organised a psychologist to give me counselling,” Sithole said in the WhatsApp message.