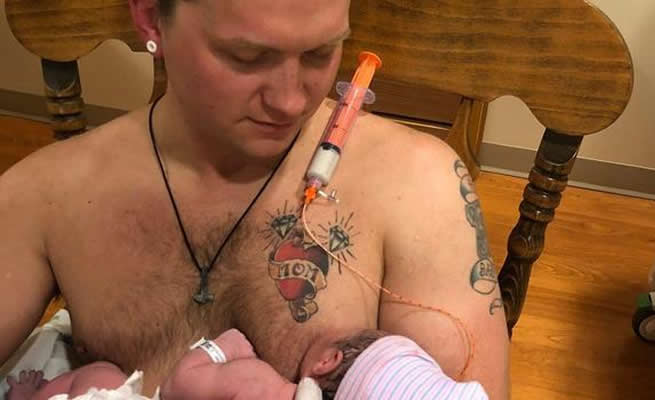 Maxamillian and April Neubauer, of Sturgeon Bay, Wisconsin, were excited to welcome their first child, Rosalía Lupita Valentina Neubauer, via C-section last week. But when April suffered a pair of seizures during labor due to pre-eclampsia, leaving her unconscious, Maxamillian says he knew he needed to step up in an extra special way.

“With C-section babies, it’s very important to get them used to eating right off the bat,” Maxamillian said. “It’s like 1:30 in the morning, April was knocked out on drugs. So the [nurses] said we could use this nipple shield and imitate breastfeeding. This is probably the best way to do it, much more natural for the baby. I said, ‘I’m willing to do just about anything once. Let’s do it!’ ”

Nurses at Door County Medical Center were ecstatic, Maximillian, 29, says, noting that they said no other father at the hospital had ever agreed to try the breastfeeding tactic. So, an eager Maxamillian sat in a rocking chair in the hospital nursery while nurses placed a small nipple shield — which he calls a “fake nipple” — onto Maxamillian’s left nipple and attached a syringe containing baby formula.

Soon, he was holding his little girl as she sucked the milk through the contraption. He first shared his experience with Love What Matters.

“Seeing as I’m not an expert breastfeeding, it was a little bit awkward at first. I’m really happy a had a couple of nurses there who knew what they were doing,” he said. “I never thought in a million years that I would ever be breastfeeding a baby. The minute they brought her out, it was hard to hold back the tears. It was instant love, it’s my baby. I was just really happy I could be there for her. It was awkwardly magical.”

About two hours later, April regained consciousness and was pleased to find that Maxamillian had taken matters into his own hands.

“We still did what we wanted to do. We did the skin-to-skin and we did the breastfeeding like we had planned, it just wasn’t with me,” April, 24, said.

“It was with him and that’s fine, it’s her dad. I’m definitely happy and very grateful that he was willing to do that and not opposed to doing it like most other dads would be. He knew how important it would be to me and to us. Knowing my husband and how he is and his personality, it didn’t surprise me. But I didn’t expect it to happen either. ”

And the birth was extra special for the couple, as April was once told that it would be difficult for her to have children. April was diagnosed with polycystic ovary syndrome (PCOS) as a teen, and doctors said her chances of having a child were “slim to none.”

“I never thought I was going to be able to be a mom, and the fact that my husband was able to give me such a wonderful gift, I have no words. I’m just so happy that she’s here,” April said. “I can’t believe I’m holding her right now because doctors told me, ‘You’re not gonna be able to have kids.’ ”

April says she was shocked last year when she learned she was pregnant. She said she took three pregnancy tests and did not accept the news until a doctor confirmed the pregnancy.

As for Maxamillian, he says he never imagined that doing his fatherly duties would land him Internet fame.

“I never thought I’d go viral for breastfeeding a baby,” he said. “It’s a little surreal still. I just did it as a dad, what I thought my dad would do for me. I’m all about that dad life!”