Roseline Siegel believes her son Liam, 14, wouldn’t have been shot and killed, allegedly by a security guard during the Mangaung shutdown protests, had he been at school.

Liam Jevono, a reserved grade 7 pupil at Heide Primary School in Heidedal, Bloemfontein, became the victim of the violent service delivery protests that swept through townships around the Free State capital on Monday.

Within two days, the protests escalated and shops were looted in several parts of Bloemfontein, which has left the area resembling a ghost town. At least 19 people have been arrested for public violence and looting.

The residents are demanding the disbandment of the Mangaung metro and for its manager to step down amid claims of maladministration.

Liam was struck by a single bullet in the stomach after a security guard at a local shopping centre tried to stop a mob that had allegedly been trying to gain entry to the centre forcefully. He allegedly did not fire a warning shot. Siegel said her son had been preparing to go to school on Monday when she noticed the commotion outside her house at about 7am. 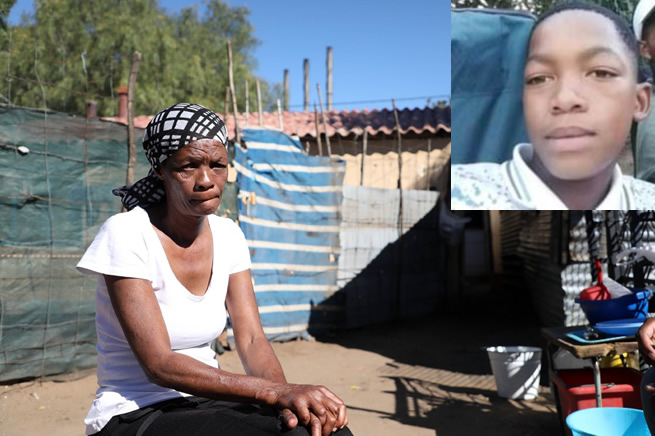 “People were burning tyres and blocking the road with rocks and protesting. I didn’t know what it was about but I decided that he shouldn’t go to school. I then found out that all the schools in our area had been shut down too,” said Siegel as she sat outside her back room shack with her neighbours who had come to comfort her yesterday.

“Around 8am he went outside the house to play with his friends. I was told that a group of protesters who were coming from Freedom Square and Joe Slovo walked past my house and Liam and his friends joined them because they had nothing else better to do. I don’t think he knew what he was getting himself into. I hear that the guard shot him when the group arrived at the centre,” said Siegel.

He died at the scene and she was alerted at about 11.30am to what had befallen her last born child. Liam’s body was identified by his father.

Brig Motantsi Makhele said the 57-year-old security guard fired a shot in a bid to scare off protesters who went to loot a warehouse on Dr Belcher Road.

“I’ve forgiven the guard who killed my son. I’m a child of God and I don’t hold any grudges. I’ve made peace with it [his death] so that he can rest peacefully. He was a lovely but naughty boy and did not deserve to die like that,” she said.

The shutdown of businesses has also delayed the teenager’s funeral, with the family unable to lodge a funeral policy claim with their insurer.

Yesterday, police vans were parked outside petrol stations and shops to stop protesters from further looting.

“At least three shops and a bottle store have been looted today and the police are having a tough time stopping these people. Everything has come to a standstill here,” said Dannie Joseph of Heidedal.

Schools remained closed and many people could not go to work as no public transport was allowed to enter the townships.