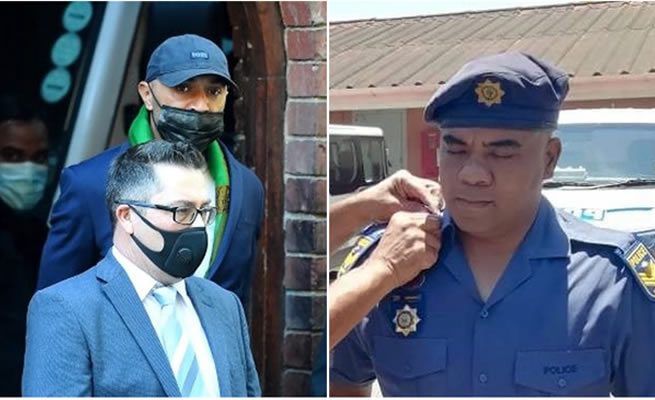 Alleged underworld kingpin Nafiz Modack has been charged with conspiracy to murder police commander Charl Kinnear in a botched grenade attack at his Bishop Lavis home several months before he was assassinated.

Modack appeared at the Bishop Lavis Magistarates’ Court yesterday alongside Anti-Gang Unit (AGU) officer Sergeant Ashley Tabisher, who is accused of taking a R10 000 bribe to provide information to the underworld about the elite police unit’s operations.

The duo had made their first appearance in two cases linked to a November 2019 incident in which a grenade was thrown at Kinnear’s Gearing Road home with the intention to kill.

According to court documents, Modack is charged along with Amaal Jantjies and her berk Janick Adonis on five counts of conspiracy to murder Kinnear.

Kinnear was shot and killed while sitting in his car outside his home in September 2020.

Modack’s arrest follows claims by the state prosecutor in Jantjies’ bail hearing that Jantjies communicated with Modack in arranging these hits.

The state alleges that Modack, Jantjies and Tabisher had formed a corrupt relationship while Jantjies and Adonis were working with the AGU by supplying them with information relating to the location of firearms and drugs.

At the time, Adonis had a case at Khayelitsha Court and was being transported by Tabisher and other members of the AGU.

The state claims that during this time, Modack had agreed to pay for Adonis’ bail application at the Western Cape High Court and, in return, Jantjies would convince Tabisher to supply information about when the AGU had planned to search Modack’s homes.

The case was postponed to Monday for the matter to be moved to the regional court, while Modack and Tabisher remain in custody.

Jantjies remains in custody pending the outcome of her bail hearing, while Adonis is already doing time in a separate matter.

“Slowly but surely things are starting to unravel and become more public about what has really been happening behind the scenes,” Nicolette said.

“Mr. Modack has always hated my husband’s guts. He hated the fact that my husband would not treat him with kid gloves.

“If their paths crossed on the side of the law, he would be treated as anyone else.

“It’s terrible having to sit in court and hear attack after attack from bombings to hand grenades and knowing all of this was planned on attacking and destroying my family, it is not easy as a mother.”