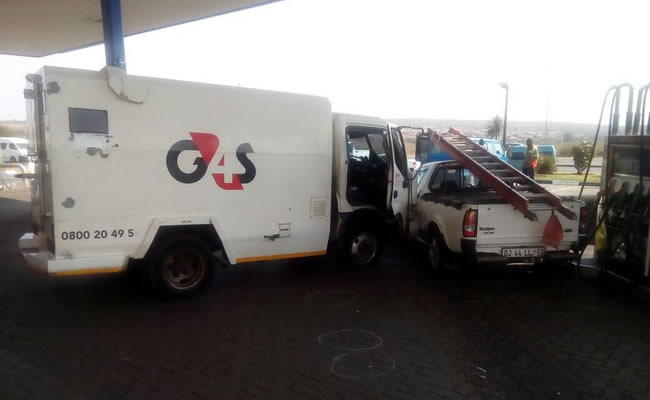 A security guard was shot and injured on the arm after cash-in-transit heist in Dobsonville in Soweto on Thursday.

A G4S guard was allegedly attacked while they were loading money into the ATM. Police have arrested six suspects following an attempted robbery at an ATM in Dobsonville.

The police’s Vish Naidoo says at least six suspects are in custody following a botched attack on an ATM in Soweto.

Naidoo did not provide details about how the suspects were nabbed but put it down to the recently revealed strategy to combat aggravated robberies.

“These successes will highlight the stabilisation operation that we’ve been embarking on to prevent and combat these kinds of robberies, as well as to trace and arrest suspects who are responsible for committing these robberies.”

It’s understood a security guard was wounded in the attempted robbery.

ER24 paramedics said when they arrived on the scene shortly after 12H00, they found a patient being treated inside a doctor’s room.

The breakthrough in Soweto follows a deadly cash-in-transit heist in Boksburg on Thursday, which left several people, including a security guard wounded, as well as one of the criminals dead.

The cash-in-transit robber wad shot dead following a botched heist in Boksburg, on Atlas Road, east of Gauteng this morning.

“One suspect has been shot and killed and an AK47 rifle recovered. Also, a security guard was shot and wounded on his hand but I can confirm that no money was taken. We’re also starting to receive reports that some civilians may have been injured during this incident but it’s not confirmed as yet.”

At the same time, the Democratic Alliance's Community Safety spokesperson in Gauteng Michele Clark says she lives nearby.

“Between 5:30 and 6:00 this morning, I could hear AK47s go off and explosions going off very clearly and it sounded like it was happening closer to my home.”

Clark says she contacted the provincial commissioner who updated her on some of the details.

“One of the perpetrators had been fatally wounded. A bystander was injured but not seriously and apparently, the police acted very swiftly.”