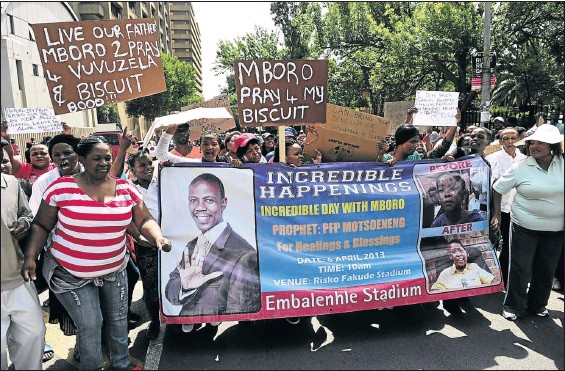 It is 10.30am in Katlehong‚ Ekurhuleni‚ and the big marquee is filling up with congregants who have come to hear Pastor Paseka Motsoeneng‚ famously known as Prophet Mboro.

Arriving in the parking lot of the Incredible Happenings Ministries‚ a group of men spot the Tiso Blackstar Group crew and immediately order one of the young ladies to escort the team to the right spot in the marquee.

Inside the marquee‚ township hymns are being sung. As we enter the venue‚ people are giving testimonies of how the anointing of Mboro has changed their lives. Men and women of all ages take turns detailing their past suffering and how it ended when they entered this venue. After some of the testimonies‚ the woman leading the programme makes some remarks.

Mboro has made headlines by praying for people’s private parts‚ even their underwear in church. Testimonies continue to come in. Some explain how they survived accidents and managed to revive their businesses due to the “anointing upon Prophet Mboro”.

One of the congregants testifies that his business struggled for three months but things have turned around and he is now growing his enterprise. He also thanks Mboro for “changes” in his bedroom.

“In my bedroom‚ it’s wonderful. There is no getting tired‚” the man says. Finally at 11.26am‚ Mboro arrives in a guard of honour formed by the ushers. The congregation celebrates his arrival with whistling‚ ululation and clapping of hands. Dressed in a light navy three-piece suit‚ Mboro calmly receives the microphone and then sings “Morena o tseba mathata a rona” which means the Lord knows our hardships.

During his sermon he moves around the pulpit. It has been set up to honour four police officers and their commander who rescued a three-year-old girl from the Blesbok River in Springs.

Two couches are placed on either side of the pulpit. A beautiful chair covered in cow skin is positioned on the right side of the altar. The officers and the mother of the child are called to the altar to sit while Mboro preaches. In his opening remarks‚ Mboro laments how society only talks about the bad that police do and never acknowledge the good.

“Police are underpaid and even the good that they do goes to waste. Nobody sees it. This thing demoralises them and they say ‘what’s the point’‚” Mboro says.

He commends the officers and calls on church leaders to honour police for the work they do.

Mboro says the child‚ who clung to a grass mound until help arrived‚ is an inspiration for everyone to never give up.

“Your life began with God and ends with God…Every good thing will face attack‚” he said.

He then asks the congregation to stand and give their lives to Jesus‚ “again”.

“Without Jesus‚ there is no Mboro. I’m not your God. I’m not your messiah. I’m you prophet‚” he says‚ as he concludes his sermon.

The officers and their commander are prayed for and will later this week receive certificates and trophies from Incredible Happenings Ministries.