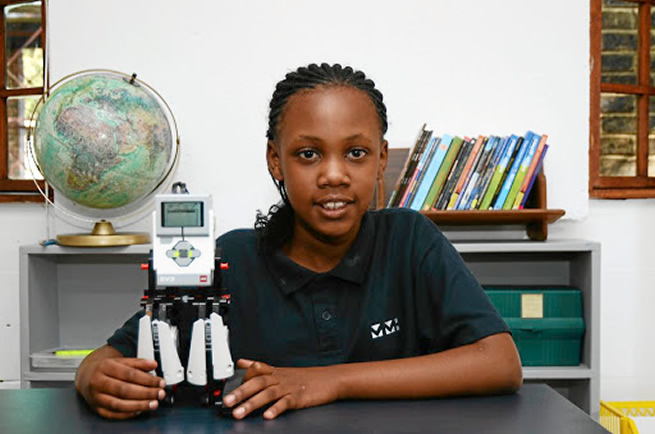 Creating an electrical Lego robot is only the first of achievements that 10-year-old Karabo Matlali is aiming for.

The Grade 5 pupil at Maria Montessori House in Fourways, northern Johannesburg, has been learning how to code since she was six years old.

Coding is computer programming where a person writes a maths-based instruction to make something work.

Coding is used in many of the technological comforts we enjoy today such as in car keys to turn on the ignition and in television remote controls.

Karabo took two months to build and develop a moving robot. She had to consider many variables such as the weight and length of the robot in order to give the correct instructions for it to move.

"Coding relaxes me. It allows me to escape from other thoughts in my head," she said.

Karabo, whose favourite subjects are English and natural science, has used coding to enhance her maths skills because of its problem-solving element.

"My mom and dad got me into coding. My dad is a mechanical engineer and my mom has a coding school – [Africa Teen Geeks, which provides computer programming lessons to underpriviledged kids]," she said.

Her mother, Lindiwe Matlali, is the chief executive of Africa Teen Geeks.

Karabo said now that she has completed her robot she will focus on the development and completion of an App which has been 10 months in the making.

"Last year I wanted a cake for my birthday and I wanted to find someone to make it and deliver it quickly," she said.

But, Karabo said, when she realised that there was no urgent cake service around, it inspired her to create an App that is aimed at delivering cakes quicker.

Her mother has been instrumental in influencing all her three children to learn and use computer programming to develop innovative ideas.

"It was not possible for me to go to communities and tell them to enrol their children in our classes when my own children are sitting at home busy watching TV," she said. "I wanted to lead by example."

The young Karabo said her dream was to use her computer programming knowledge to create more innovations.

However, Karabo's ultimate dream is to pursue a career in fashion design.