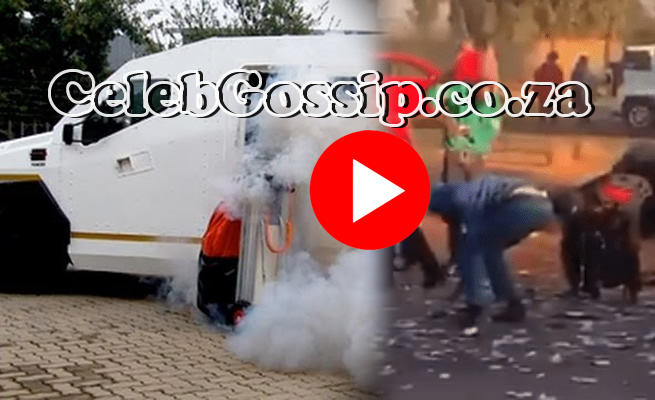 THERE was shock and horror at a circulated video showing how bystanders in Gugulethu would not assist cash van security guards who were shot and robbed but instead further robbed the van and took the firearms of the injured guards, one of whom died at the scene.

Based on footage of the scene that has since gone viral, we can confirm that the cash van was taken down only a few metres away from the Gugulethu Sports Complex, a recreational centre often frequented by children.

Ward councillor Sharon Manata said what happened was “very bad”, especially when the community ignored a “dying man” for the sake of money.

Manata said soon after she heard about the incident, she visited the area and saw children watching the shocking scene.

In a more than two minutes-long video, which celebgossip.co.za is in possession of, the community was seen running around the SBV van shouting “we want money”, “come with money”, “the money is insured” and “take money”, while the guard was seen lying in agony.

As received: Cash in transit heist NY opposite Gugulethu Sports Complex. It is alleged that robbers threw a hand grenade to the cash van. Robbers got away with one bag of money and one security guard was shot. Incident took place late today pic.twitter.com/aH52dlptpY

Police spokesperson Brenda Muridili said the police were probing the circumstances surrounding a cash-intransit (CIT) robbery, perpetrated by an unknown number of suspects, in NY7 in Gugulethu, on Monday evening.

Muridili said the suspects, who drove a Toyota Quantum, approached the guards of a CIT truck.

She said explosives were used to gain access to the safe in the vehicle.

One of the guards was fatally injured in the explosion.

“The suspects fled with an undisclosed amount of cash and are yet to be apprehended. The Hawks are investigating further,” she said.

Muridili said two men, aged 19 and 36, were arrested for possession of a firearm, which was identified as one of those stolen from the security guards.

It’s believed that a number of unidentified suspects cornered the cash-in-transit truck into the narrow street and flung a hand grenade inside the truck.

The explosion immediately halted the van and injured a number of guards. In a statement, SBV confirmed that an armed security guard was fatally wounded, while “fellow crew members were seriously injured and have been admitted to hospital.”

The CIT company has since issued a R1 million reward for information on who was behind this vicious attack. SBV Services group chief executive Mark Barrett said the company was offering a reward of up to R1 million for information leading to the arrest and prosecution of the suspects who attacked the SBV team.

“In response to this violent and senseless attack, we are calling on communities to work with us to ensure that all those involved are brought to book and feel the full consequence of the law. If you know something, say something,” Barrett said.

He said they were working closely with the police and would never close a case until there was a conviction.

“We know that communities are critical in the fight against crime and encourage anyone with information to call our confidential Early Warning Robbery Hotline on 083 408 7029.”

The company would not be baited into revealing how much was lost in the robbery. However, according to reports, it’s said that the suspects made off with at least one sack of cash.

Right after the incident, a large crowd of onlookers gathered around the money truck, where the guard was lying, struggling to stay alive.

In a shocking display, the onlookers — except for one or two concerned fellows — cared less about calling authorities. Instead, most of them tried to see if there was any cash left behind in the truck.

Some were laughing hysterically at the situation, a spine-chilling display that speaks volumes about how violent crime of this magnitude has somehow threaded itself in the seams of township culture.

“It is what makes townships the hub of crime, and the government was not taking that seriously,” he said.

Gugulethu Development Forum chairperson Vincent Domingo said the forum would meet the area station commander to discuss the trend of crime in the community.

Cash in Transit Association of South Africa spokesperson Grant Clark said they were still negotiating with the police on how to collaborate to “stem the tide of these attacks” as done in the past.

Anyone with information can contact their nearest police station, Crime Stop at 08600 10111, or send tip-offs on the MySAPS App.