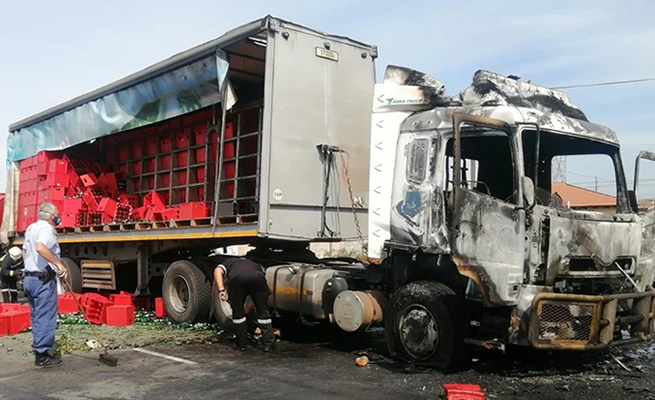 SIX vehicles have been torched in Gqeberha, Eastern Cape, during violent service delivery protests which started on Monday afternoon.

On Tuesday three trucks and two buses were torched on Addo Road in Motherwell. While on Monday a South African Breweries truck was looted and torched on the R75 on Uitenhage Road.

Tavern owner Nokuthula Mtimka from Joe Slovo kasi said: “At about 12.30pm on Monday, the truck driver came running to my tavern. He told me the protesters from Bayland squatter camp stood in front of his truck and ordered him to get out and torched it.

“When I looked on the road, the truck was on fire and dozens of the protesters were running away with cases of booze. I then called the cops. These people did not only rob the truck, but my business has also been affected.

“The truck was also supposed to deliver more stock this week. But with this violence I will have to go and collect the booze myself,” she said.

Bayland is four years old. Residents use pit toilets, streets are muddy and there’s no electricity.

Bayland community leader Veliswa Ngqoko said: “At about 10am we had a meeting with two municipal human settlements officials. The residents wanted to know when exactly our area will get service delivery. But the officials failed to give us answers. Then the started protecting on the road.”

“The residents looted all the booze. The total damage is R1,4 million.”

Beetge said the violent protests have spread to Motherwell.

“On Tuesday at about 5am a tanker truck was hijacked by protesters on Addo Road and set alight. We don’t know what was in the truck. Two other trucks were also set alight at about 6am, not far from the first incident.

“At about 7am on M17 Road, two Algoa Bus Company buses were also set alight. The roads remain closed and cops are working tirelessly trying to remove the burning tyres on the road. But the protesters keep on burning tyres.”

A bus commuter in a video which has been circulated on social media said the protesters stoned the bus while they were inside.