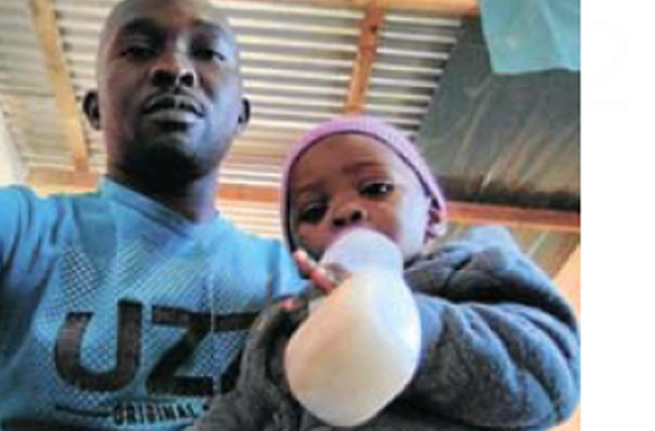 There is still no sign of a father who is being sought by police after allegedly poisoning his toddler last month in an apparent desperate bid to escape poverty.

Dad Russel Makhubela, 32, partner Thanduzile Ndlovu, 26, and their two-year-old daughter Phiwokuhle Ndlovu moved from Mbombela to the newer L section of Lawley township in Gauteng in August last year to look for work.

Despite being a registered security officer, Makhubela was unable to find work and could not afford the fees to maintain his registration. He was working piece jobs when lockdown was enforced and the family lost their home.


Julie Smith, researcher at the Pietermaritzburg Economic Justice & Dignity Group (PMBEJD), said malnutrition and hunger were a systemic problem and that cases like this highlighted what was happening to many other families in SA.

“What we are hearing are cases like these where people choose suicide rather than starvation. Starvation is a very painful process, and you don’t see homes of people where everyone died from starvation, but rather you hear about suicides and other issues like health and mental health crises.”

Image: Supplied by the family

On Thursday, March 25, the family went to gather firewood in the thickets above their shack when Makhubela, depressed and desperate after having to rely on his sister for money, decided the family should commit suicide rather than suffer poverty.

The wood was to cook their last cup of mielie meal – their only food that day.

“He … asked me: ‘How would you manage to take care of the kids if I’m gone?’ And I said: ‘I’ll try my best even though we have little money.’ But he told me he’d taken poison and given it to the child too. He said we should die together as a family rather than suffer through poverty.

“I said I wouldn’t and pleaded with him to go back home, but he told me: ‘Can you see what’s happening to the child? It’s too late.’ I looked and there was froth coming from her mouth.

“I ran with the child, crying for help, but then I looked down at her and realised she was no more. I looked back up the hill for my husband, but he had disappeared.”

Phiwokuhle was buried last week Wednesday in a ceremony provided by Ndlovu’s community.

Last week Capt Mavela Masondo said police began searching for him as soon as they got the callout. He confirmed the toddler had died after ingesting “an unknown substance”.

Masondo said dogs were brought in and they had found items of the man’s clothing near a small dam at the top of the hill. Divers had searched the water but had not found anything.

To determine the substance that killed the toddler might also be a long wait – up to a decade.

Health minister Zweli Mkhize told parliament in January that 28,818 toxicology reports were outstanding in three of the department’s laboratories and that more than 30,000 reports had been outstanding for 10 years and longer.

The chief specialist at the Gauteng Forensic Pathology Service’s southern cluster, Prof Jeanine Vellema, also told the Sunday Times earlier there was a backlog of up to 10 years at the government toxicology laboratory.

Vellema said there were only three forensic chemistry laboratories – in Cape Town, Durban, Pretoria and Johannesburg – which did toxicology tests, and the backlog was as long as 10 years.

“Toxicology is a disaster,” she said. “Police will often say they can’t continue with the case until the results are in, but we can’t complete our files until we get that toxicology report. So when we see a case where we know there needs to be a tox screen we start sweating because we know it will take years.”

Meanwhile, Smith said the acute pain of hunger – and why a person could possibly look to suicide instead of suffering the pain or watching his children suffer this pain – “needs government intervention because there are millions who need help”.

She said child hunger should be the most important issue to solve because of its knock-on effects on education, health care and the economy.

“Hungry children can’t learn, and this adds to the cycle of poverty. These children are also often sick, so it adds to the burden of hospitals.

“One of the biggest government expenses is education, but if children cannot absorb what is being taught we are wasting that money. So the best place to start spending is on helping children get the nutrition they need.”

According to the Household Affordability Index released by the PMBEJD on March 31, 55.5% of the population lives below the poverty line.

Smith pointed out these numbers were the same as in Guinea – one of the poorest countries in Africa.