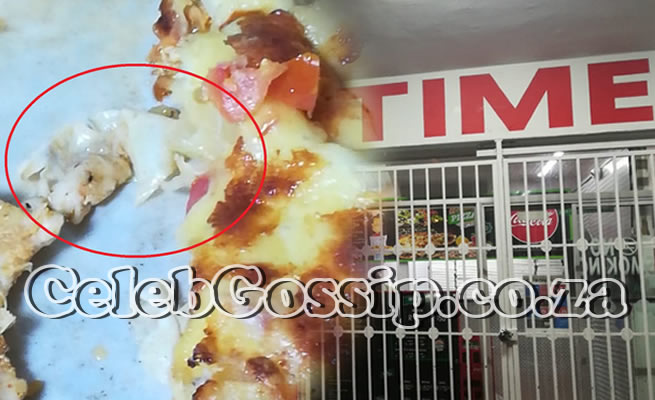 A Heideveld pizza lover lost his smaak for his favourite restaurant when he found bits of latex mixed in with his supper.

Zain Moos said he bought the pizza for his family of five at Pizza Time in Gatesville, Cape Town, last Thursday, but instead of meat and cheese he got something that made his family naar.

“I bought a pizza that was a mix of a gheema steak with chicken and pineapple. When we sat down to eat, my 21-year-old daughter noticed something when she took a bite and when she looked at it so she saw that it was a piece of a latex surgical glove.

“She felt so naar, because she did not know where it came from, how it got there, and who was wearing it before that it made her throw up.”

Zain says that after finding the ‘secret’ ingredient he called the restaurant, but was greeted with laughter which made him kwaad.

“They said they cannot give me a number for a manager and then I demanded my money back, which they gave. They say their policy is to give the money back, but I had to fight for it and besides that, my main issue was the way that they handled the whole situation.”

The 56-year-old father says he’s been a customer of Pizza Time for over 15 years and ordered pizza at least once a week, but he won’t be buying from them again.

A manager at Pizza Time, who only wanted to be identified as Lauren, said that she was aware of the incident and that an apology was made along with the refund.

However, she refused to provide the Daily Voice with a number for the owner as it was “against policy”.

Several people have died after ingesting and choking on latex gloves, including 78- year-old Irene Collins from, Manchester, UK, in 2018.