Home General News Racists took away my manhood: Limpopo man who was forced by his... 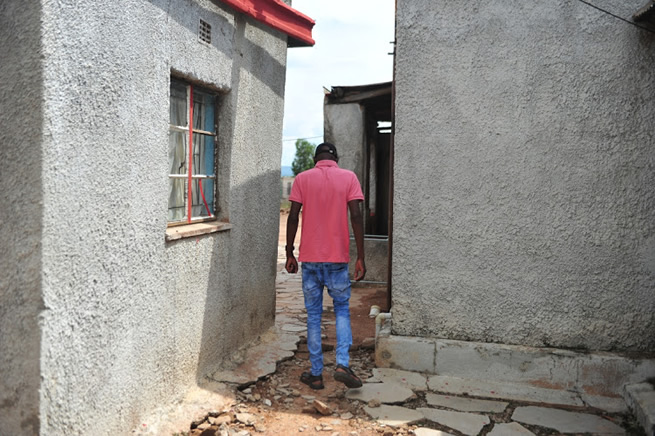 Two months before Joseph Mona’s former employers were sentenced for assaulting him and feeding him faeces, he escaped his neighbours who were taunting him about the incident.

Mona, 40, said he was tired of being made a laughing stock by the community of an informal settlement on the East Rand over the December 2017 racist incident that has left him scarred for life with severe illnesses.

On Friday, the Springs regional court on the East Rand sentenced his former employers Harry Leicester, his wife Maria and their son Chris to 10 years imprisonment for attempted murder and two years for crimen injuria.

The sentences for the incident in which the family forcefed him stools from a chemicalised septic tank before throwing him inside the tank in an attempt to drown him will run concurrently.

More than three years after the horrific incident, Mona is still struggling with the trauma of what happened to him.

“Those people took away my manhood. Those chemicals from the septic tank damaged me. My life will never be the same again,” said Mona from his new home in Dennilton, Limpopo.

During the assault, which took place on their farm in Endicott in Springs, the trio also called him a k **** r.

The assault occurred after Mona failed to switch on the engine of the septic tank.

“I’m a damaged man. I don’t work anymore. I have not worked since my assault. I had to leave my old place in Springs because of being taunted by the community. I had become known as ‘the man who ate faeces’ and I started getting threats from people I did not know. It was hurtful. I still have nightmares of white people choking me.”

Mona’s health has never been the same and continues to deteriorate.

He has received treatment from three hospitals and his medical records show that he has been treated for chronic constipation, painful defecation, perianal warts and posttraumatic disorder.

Mona, who never received psychological help since the incident happened, was operated on in March 2019 and needs funds to be able to book for another procedure.

“I have anger issues which I take out on my innocent girlfriend who has been looking after me,” he said.

Mona successfully sued the family in the Equality Court in February 2019 and though he was awarded R200,000 in damages, he is yet to get the money as there is an appeal.

“I have not seen any of the R200,000 from the Equality Court and my girlfriend takes care of me. I don’t really care about the sentence the Leicesters received. It won’t change my situation,” said Mona.

In his judgment at the Equality Court, magistrate Pravina Lazarus said the family had stripped Mona of his human dignity.

“The applicant suffered the lowest form of humiliation. He was treated worse than an animal,” Lazarus said.

He ordered that the family issue a written public apology, which had to be published in a local newspaper by March 11 and that the family must attend a programme on race relations for a period of three months at the SA Human Rights Commission.

The commission’s senior legal researcher Jackson Mzila, who represented Mona at the Equality Court, said the Leicesters appealed the judgment and it is still ongoing.