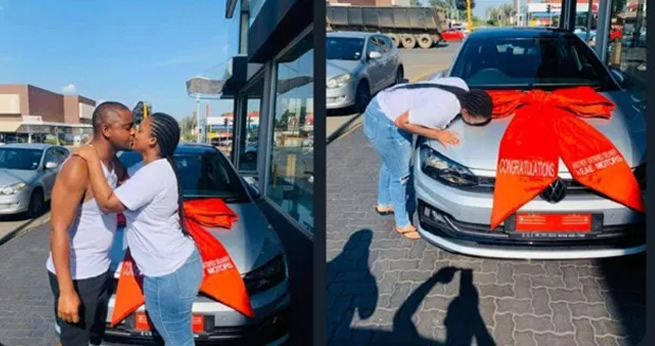 Today is a funeral day for a South African couple who ‘went viral’ on Valentine’s day after celebrating love by gifting each other a brand new Volkswagen Polo. 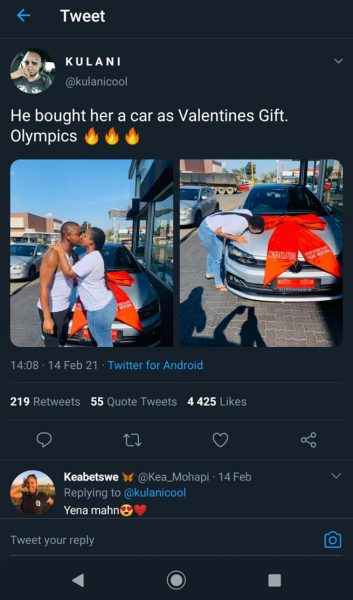 They won so many hearts on the day when the boyfriend bought his girlfriend a brand new VW, but not everyone was celebrating with them.

In a post that tweeps regard as a death wish, one user posts, “VW early ticket to death, I guess the poor guy is tired of that chick shem.” Some however relate the whole ordeal to reckless driving rather than witchcraft and death wishes.

Weighing in on the matter, masses flock to the comment section.

People must just drive responsibly, adhere to road traffic regulations. May their departed souls rest in peace, this is very tragic.

I ON THE OTHER HAND SEE THAT THE GUY WAS ACTUALLY ADVISING THE TWO(COUPLE)₩ TO CHANGE THE “VW” FOR ANOTHER BRAND BASED ON FACTS. I OWNED ONE, THOSE MACHINES JUST GIVE A TINGLING SENSATION TO SPEED FOR NO REASON

NO SPIRITS HERE. DON’T BUY A VW AS A FIRST CAR IF YOU ARE NOT WELL ON THE ROAD. MANY OF US HAVE LOST FAMILY MEMBERS TO VW. FROM THE GOLF 4 GTI TO POLO CLASSIC TO GOLF R.

I ALSO KNOW THE TREND OF VW DRIVERS,,, SIVIKA BONA EMGAQWENI.. RECKLESS AND ALCOHOL… SO, THE GUY JUST PREDICTED THE OUTCOME BASED ON THE VW DRIVERS TREND… AKUKHO KULOYA LA.

All these wishes seem to have come true this past weekend. Jessica Moosa and Lungile Mashele were driving together with their friend Mlungisi Madonsela when they crashed on a tree along R571 and all three died on spot. They died in the same car that Lungile gifted Jessica on Valentine’s day as they celebrated love.

News of their death was announced by Nkomazi FM, a community radio on Facebook, revealing that their memorial service will be held at KaMaqhekeza Community hall on this Friday at 11am.

It is without question that VW owners are the most reckless drivers in South Africa. Whatever occurred to cause the accident leading to the loss of the lives of these three, people can not help but continue speculating.