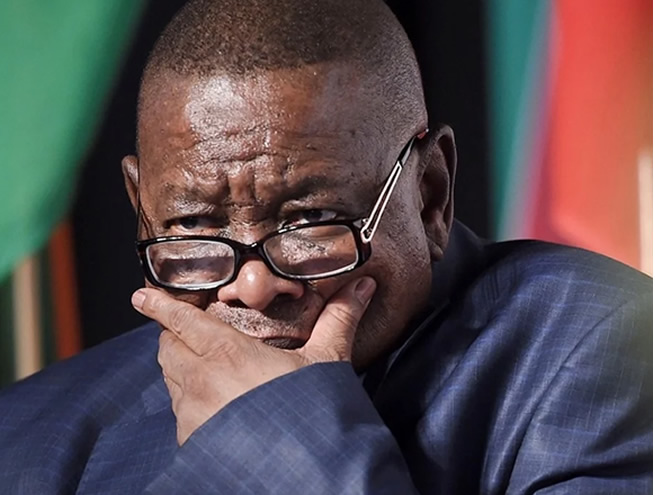 This weekend, the minister is meeting with the SA Union of Students (Saus), which is mobilising for a national shutdown of all higher-education institutions in the country tomorrow if their demands are not met.

This week, the union wrote to President Cyril Ramaphosa, demanding that he scrap student debt at universities, which has ballooned to R10 billion.

FIRST ROUND TO STUDENTS

Students believe they scored their first victory when Cabinet announced on Thursday that additional funding had been allocated for the scheme.

At that Cabinet briefing, Nzimande detailed interventions that had been taken by Cabinet, which included injecting more than R6 billion into Nsfas to allow deserving first-year students to enrol at universities this year.

Asked about the Saus' demands, Ramaphosa's acting spokesperson, Tyrone Seale, said Nzimande had "outlined Cabinet's decision, which was based on submissions by a range of stakeholders and by the department of science and innovation".

– An immediate directive to Cabinet to reverse the R6.8 billion budget cut for Nsfas and the R24.6 billion cut for higher education

– Ensuring that Nsfas funding for first-year students be provided for the 2021 academic year and A pronouncement on postgraduate funding in line with the National Development Plan Vision 2030 of creating a new generation of academics.

Saus also told Ramaphosa that it was under his leadership that Nsfas would be a casualty of the R6.8 billion budget cut for loans and bursaries.

It's clear that all these budget cuts will affect many students, especially those from poor and working-class backgrounds. Students are currently being denied permission to register at universities and colleges because of this announcement and also because of the student debt, which is now above [a] total of R9 billion. Economic challenges posed by Covid-19 have worsened the situation for vulnerable families," read Saus' letter.

Mfeka told City Press that now was the perfect time to strike and intensify demands for free education: "We need to act now and force government's hand."

Nzimande said his department's budget would be reprioritised to make the money available.

However, the minister said there would be no funding available for new entrants for second-year or postgraduate qualifications, as the latter were the responsibility of the National Research Foundation.

He said Cabinet had agreed that a comprehensive review of the student funding policy of government was urgently required to support students in financial need and gain an understanding of their holistic requirements.

This included those from poor and working class backgrounds, as well as the 'missing middle &ndash; those from households whose annual net income was more than R350 000.

Wits University vice-chancellor and principal Zeblon Vilakazi said student debt was not a 'Wits problem, but a national crisis' that required civil society, government, universities and the private sector to engage with it to find sustainable solutions.

He said there was a need to rethink the implementation of the 2017 free higher education announcement.

Vilakazi added that this could be an opportunity for Universities SA (Usaf), an organisation represented by 26 vice-chancellors, to look deeply into the implementation of recommendations of studies that had been done previously.

Those studies included a report compiled by the Commission of Inquiry into Higher Education and Training, which was headed by retired Judge Jonathan Heher.

It was commissioned by former president Jacob Zuma in 2016 at the height of the #FeesMustFall protests.

The commission had investigated the feasibility of free higher education and its report had been released in November 2017.

Following the release of the report, Zuma announced on December 16 2017 that government would provide free higher education in 2018 for first-year students from the poor and working class where the combined household net income was less than R350 000 a year.

Nzimande said if that if it had not been for Zuma's announcement at Nasrec during the ANC national elective conference that the ANC policy on free higher education would be realised, there would not be such turmoil at the country's universities.

Zuma responded by saying he found Nzimande's statement shocking, because free higher education was an ANC policy and had to be implemented.

Vilakazi said some of the recommendations of the Heher report had not been implemented.

"Clearly, we've reached the ceiling now and that will require a dialogue. A bailout could be one of many solutions … But a bailout doesn't work sometimes. Its a question of how Usaf, the higher education department and Treasury work out a process of what can be implemented that's sustainable beyond bailouts," he said.

He added that there needed to be discussions between civil society, government and the private sector to resolve the crisis, because every year there were protests and no sustainable solutions.

"This isn't a Wits problem. Within the university, we can do whatever we can, but this is a national crisis," Vilakazi said.

He said the protests, which saw a clash between police and students on Wednesday, resulting in the death of 35-year-old Mthokozisi Ntumba, had taken place when he (Vilakazi) was trying to find a way around the system at Wits.

Usaf CEO Professor Ahmed Bawa said student debt to universities was in the region of R10 billion, which was extremely high.

"These resources would be used on infrastructure development and maintenance and producing better staff-student ratios, among other things. The universities are facing other severe financial stresses at the moment and, unless there's some national approach to addressing this aggregate debt, it's not possible for the universities to simply write off this debt," he said.

Bawa said Usaf been informed by government that there was no possibility of a bailout.

He added that it was unlikely that there would be special funding this year in the context of the Nsfas shortfall, possible cuts in subsidy and an underperforming economy.

However, he said they hoped that consideration for special funding would be given in subsequent years.

He confirmed that subsidy funding had been decreasing for universities.

"There's been a general decline in funding to universities, especially if one focuses on the subsidy per student. This has been in decline for 10 years or more. What this means is that it's just a question of time before the effectiveness of our universities is undermined,"explained Bawa.