Home General News Ghost house nightmare: Woman told to move out of the house she... 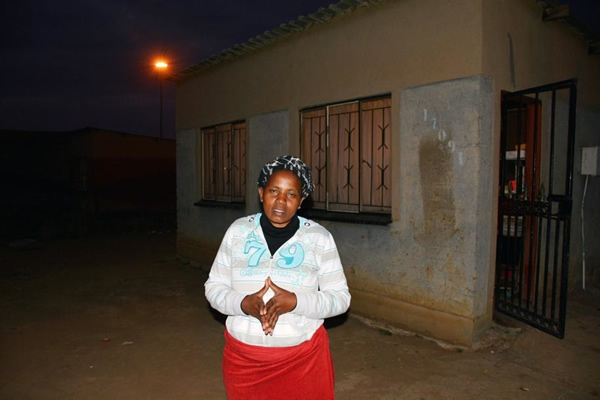 The residents of Thubelisha phase 2 in Tsakane, Ekurhuleni even call it a ghost house!

But all this matters little to Khanyisa Danisa – she has become the latest victim to be kicked out of the house with no name.

Residents said the house was just one of many that had been reserved by corrupt housing officials and some individuals to make money.

“Money is taken from people on the pretence that these houses are sold to them, but after some time they are kicked out to make way for another victim. If they refuse to leave, they are threatened with death,” one of the residents told the SunTeam.

Khanyisa said she was receiving calls from a man called Zama Zwane, who claimed the house belonged to him.

She said the man gave her and her kids until Saturday to leave the house or die!

“I have two kids and one is disabled. In one of the SMSes he sent, he threatened that I would bury my kids one by one.”

Khanyisa went to open a case of intimidation at Tsakane Police Station but was turned away.

Khanyisa felt said she went to the municipality’s customer care in Tsakane to check on the ownership of the house.

She was shocked when she was told that the house didn’t belong to anyone but the municipality.

According to residents, Khanyisa wasn’t the first person to get kicked out of the house.

“There was a woman who lived in that house before. She even paid R15 000 to buy it but she was kicked out. She had no legal recourse because the house is not registered,” said one resident.

Daily Sun spoke to Zama, who claimed the house was his.

But Ekurhuleni spokesman Themba Gadebe said the house was not registered under anyone’s name and was not on the municipal housing database. He said the municipality was investigating.