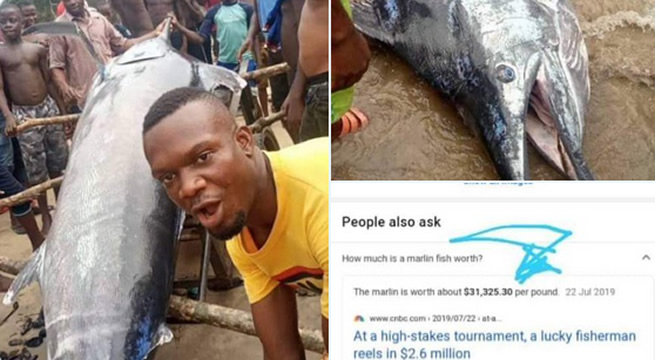 A Nigerian man reportedly caught a special fish worth millions and slaughtered it.

After catching the special fish, the villagers made a feast out of the blue marlin that’s worth about $2,6 million (R40 million).

In pictures published by Africa Facts Zone on Twitter, the man and his fellow villagers can be seen surrounding the blue marlin.

A Nigerian man captured a Blue Marlin Fish worth $2.6 million. Him and his village people ate it. pic.twitter.com/awcJ3TlZRF

Blue marlins are valued as a sport fish, but they’re also sold in sushi restaurants and at roadside stands as barbecue fish.

Intense fishing pressure led regulators to ban the sale of Atlantic marlin in some countries such as the USA.

A blue marlin once fetched a mind-boggling $2,6 million, at the high-stakes world of tournament sports fishing.