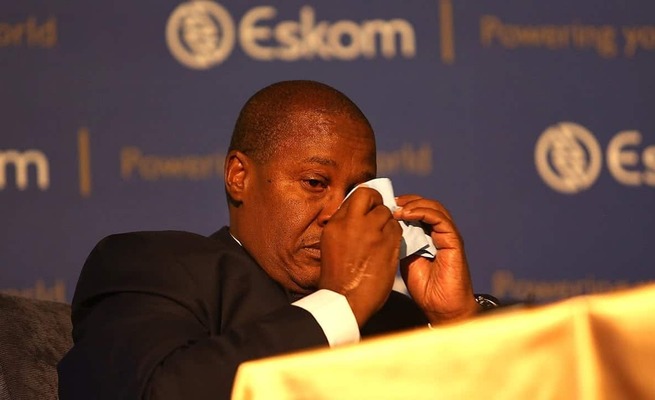 Former Transnet group chief executive Brian Molefe took exception to the line of questioning from the evidence leader at the Commission of Inquiry into State Capture.

Evidently finding it hard to handle the pressure – amid protests from his legal team that he was being cross-examined by Myburgh – a fidgeting Molefe, who either scratched his head or touched his large reading glasses, appeared unhappy about responding to the barrage of questions on his third day of giving testimony before Deputy Chief Justice Raymond Zondo,

At the core of Molefe’s anger was his being questioned by Myburgh whether he knew that half of the performance incentive payment of R78 million paid to Gupta-linked transaction advisors Regiments Capital “for having saved the state-owned enterprise of R2.8 billion”, went to Gupta lieutenant Salim Essa, “making it money laundering”.

Molefe signed the appointment of McKinsey as transaction advisors, which later ceded its rights to Regiments Capital.

Explained Molefe: “I was confused why legal people never picked this up. It is confusing and I don’t know what the answer is. Perhaps legal people should explain what happened here.”

Myburgh: “But when you read this document, you approved it. Who did you think the transaction advisor was?”

Molefe: “Please don’t put words into my mouth because it was unnecessary to remind me this happened at the time.

“This was a remuneration model on how transactional advisors would work.

“At the time I was not aware of all these legalities of contracts.

“My understanding was that McKinsey was allocating some work to Regiments, not aware of the cession.

“If these people did what they promised and saved us R2.8 billion, you had to incentivise them to do more.”

Myburgh: “Was there anything in law compelling you to do this?”

Molefe: “There was R2.8 billion on the table which was a saving through the work of the transactional advisors.”

Myburgh: “Do you know what happened to half of the money?” Molefe: “No, I do not know.”

Myburgh: “It was paid to Mr Salim Essa.”

Molefe: “Had we known the answer, the Transnet decision would have been different.

“I do not know I was paying half of the R78 million to Mr Essa. I did not know him.”

Myburgh: “He was the money-laundering lieutenant of the Guptas.”

Molefe: “Where do you get evidence that I knew this? Unless you are a witchdoctor.”

In what has been likened it to “an open exam book”, Molefe earlier found himself in hot water at the commission over using his cellphone to remind him of “my notes from last night”.

Myburgh: “Mr Molefe, I notice that you are reading something on your phone.

“I don’t necessarily have an objection to that as long as the document is shared with us – anything you are reading from, which is in writing.”

Molefe: “It is my notes that I made last night.”

Myburgh: “As I said, I have no objection to that but the protocol dictates that it should be shared with us.”

Molefe: “I have not made copies. It is just hand-written notes on the phone.

“Can I use my notebook to read from?”

Zondo: “If you are not going to rely on them in answering questions, you don’t need to furnish them to the commission.”

Molefe: “Chair, these notes are meant to remind me.”

Hearings into the state capture of state-owned enterprises continue.