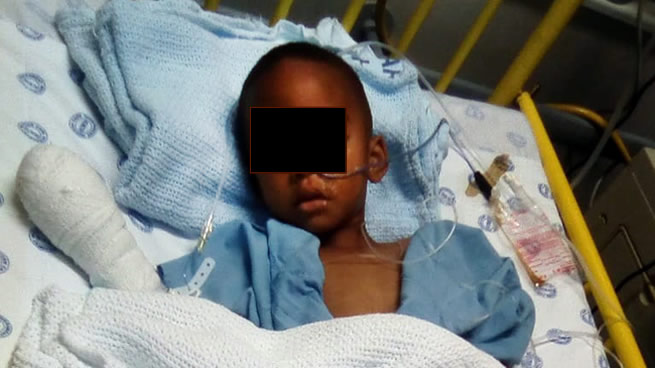 A four-year-old child was shot in the stomach during a gang attack in Lavender Hill.

The two shooters were aiming at rival Flakka gang members who were sitting on a street corner when the bullet hit little Clyde Camphor on Monday afternoon.

On Tuesday, the boy underwent an operation because the bullet had ripped his intestines out.

The child was hit while running away from a hail of bullets fired on the corner of St. Christopher's Avenue and St. Alexander Circle.

Tyron Koopman, 17, a Flakka gang member, was shot and killed during the attack.

Clyde’s grandma Lenore Nkohla, 54, explains: "We were inside our yard when the shooting started.

"After hearing the gunshots, we started to run, the children entered the house and I went to the other side of the house.

"One of the kids shouted Clyde had been shot. As I walked inside he had his T-shirt up and I saw his intestines hanging out. The bullet went through his stomach.

"We rushed him to the hospital and he had his operation and he is doing well."

“It’s circumstances that led him to that kind of life, we lost our mother when we were young and his father was never around,” Eltino explains.

“He dropped out of school and he joined the gang.

“On Monday he was sitting at the corner with his friends when a Hyundai stopped and two unknown guys got out and started shooting where my brother was and the opposite side.”

Eltino was called from his home to identify his brother’s bullet-riddled body.

Police spokesperson Sergeant Noloyiso Rwexana says the shooters fled the scene and have not been arrested.

“Steenberg police attended a shooting incident in Lavender Hill where a 17-year-old male was shot and fatally wounded and a four-year-old child shot and wounded,” she says.

“When the police arrived on the scene, they found the body with multiple gunshot wounds.

“The victim was declared dead on the scene by medical personnel.

“Cases of murder and attempted murder were opened for investigation.”