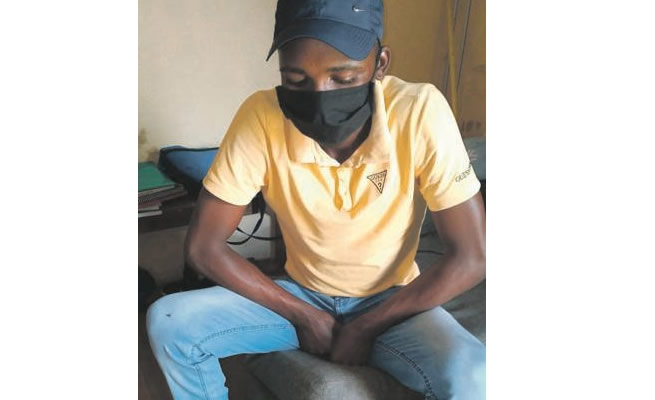 When the dog bit his manhood, Nduduzo didn’t think it was too bad.

“The bite didn’t seem serious, but I was wrong,” he said.

“MY P3NIS HAS GONE TO SLEEP AND IT WON’T WAKE UP!”

Nduduzo Simelane (42) from Jabulani Hostel in Soweto said he thought his neighbour’s dog liked him.

“When I had leftovers I’d feed the dog and the dog would come to me and jump up against me. It was a sweet dog,” he said.

But two weeks ago he was coming from the shops with grocery plastics in his hands and suddenly the same sweet dog became vicious.
“It attacked my 4-5.”

He said he chased the dog away with stones, and when he got home he washed his 4-5 with disinfectants.

“The bite was not so serious. It didn’t hurt much and I had no problems when I went to the toilet,” said Nduduzo.

He said the owner apologised and told Nduduzo that same week he had to stop the dog from biting an old lady.

Izinduna got involved in the matter and it was decided that the dog be removed from the community.

But then Nduduzo called his girlfriend and she came to visit him. And that’s when he found out the attack that he thought of as nothing was more serious than he thought.

“My 4-5 refused to wake up. I think that bite messed it up,” he said.
“I thought maybe I had a problem with my girlfriend and tried with another woman but the same thing happened.”

Dog owner Lucas Mdunge (49) apologised to Nduduzo and said they had to let the dog go because it had become vicious.

“I’m sorry if Nduduzo’s manhood isn’t functioning well now. If there’s anything I can do to help him, I will do it,” he said.

Induna Mthetheleli Mhlongo said they discussed the matter and they came to an agreement.

“Nduduzo showed us where he was injured. It didn’t look bad. I think his 4-5 won’t wake up because he’s traumatized. With time it will get back to normal.”

He said the condition may last for months or even years.

He said causes can bring back memories of the trauma, accompanied by strong emotional and physical reactions.

Nduduzo’s girlfriend sees her boyfriend every now and then but they have become more like brother and sister.