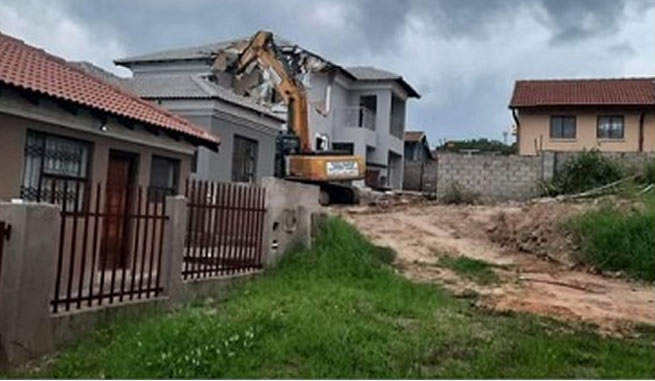 People are wondering if he is struggling to come to terms with the break up or seeing his millions go to waste.

The internet was a hive of activity with comments, memes and reruns of the video of the businessman who hired an excavator to demolish a house worth R7 million he had built for his girlfriend in KaMagugu, Nelspruit.

A business man called in an Excavator and TLB to demolish a house he built for his girlfriend after she broke up with him( Video in the replies) pic.twitter.com/IUbk9Z7WjV

But a close friend has come out to say his friend is really struggling to cope with everything.

The friend, who wants to remain anonymous, said: “This thing is sensitive. My friend is not okay now and I don’t want to cause more harm.”

People were beyond shocked to witness a mansion being flattened after the woman broke up with him. One of the videos suggests the man had paid for the land where the house was built, even though it was registered in the woman’s name.

The video divided men and women as they debated whether he had the right to demolish the house, even if he paid for it. They also questioned whether a scorned lover can “repossess” a gift after a break up.

Recently the high court in Makhada, Eastern Cape, ruled that a woman who had permitted her lover to use a car she bought in her name, may not claim the car back after their affair turned sour.

The woman demanded her ex-lover return the car after their relationship broke down.

When they couldn’t reach an agreement amicably, she involved the courts. She won the case in the local magistrate’s court. But her lover appealed the case in the high court and argued she did not have full ownership of the car he had an agreement to use the car on the condition he refunded her the instalments and other costs of the car every month.

While she was hoping the courts would come to her rescue, it is here when her woes worsened. The court said even though the woman had taken a loan for the car in her name and the car was registered in her name, she could not take back the car from her lover.

This is because she did not own the car and the car was in fact owned by the financial institution until it was paid off. She was also ordered to settle the legal costs of the defendant.