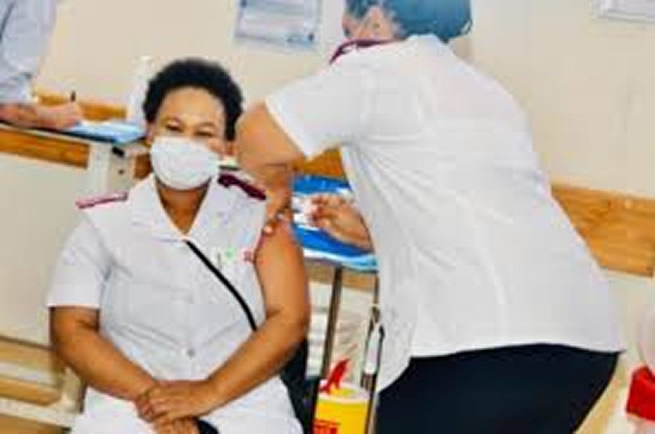 SHE knew something big was happening. The hospital was buzzing with activity and members of the media and camera crews were everywhere. Zoliswa Gidi- Dyosi ignored the commotion and went about her rounds in the labour ward at Khayelitsha District Hospital in Cape Town.

When her manager later told her President Cyril Ramaphosa and health minister Zweli Mkhize were visiting the hospital that day, it all made sense.

“I thought, ‘Oh okay, maybe that’s why the media is here’,” Zoliswa says.

She didn’t expect all eyes to be on her – but that’s precisely what happened when she became the first person in South Africa to receive the Covid-19 vaccine.

The previous day the first batch of the Johnson & Johnson vaccine had arrived at OR Tambo Airport in Johannesburg and Zoliswa (42) immediately volunteered to be vaccinated. But what she hadn’t expected was to be put at the top of the list.

She admits she was nervous when she stepped into the room with all the cameras trained on her, but the immunisation process was over in the blink of an eye.

“It didn’t hurt – it’s just a needle prick but it’s also such an honour to be able to serve my country,” .

Zoliswa, who works as a midwife in the hospital, is one of the 16 front line workers who received a jab alongside Ramaphosa and Mkhize that day.

Shortly after she got her shot, three of her colleagues – Dr Sa’ad Lahri from the hospital’s emergency unit, Mavuyo Mpambani from housekeeping and admin clerk Cwengisa Dadirai – rolled up their sleeves and followed in her footsteps.

“I didn’t think I was going to be the first person in the country to get vaccinated,” she tells YOU.

“My husband called and said, ‘You’re trending. You’re on the TV!’ ”

She was absolutely fine afterwards, she adds, and helped deliver a baby shortly after she’d had the jab.

Zoliswa will now undergo a six-month observation process with a group that includes nine others who were vaccinated that day as part of an on-going study to test the efficacy of the vaccine and the production of antibodies to stave off the virus.

“It was just a normal working day,” she says. “I felt just fine after the injection and I still feel fine now.”

SOUTH Africa is the first country in the world to officially roll out the Johnson & Johnson vaccine, which has been approved by the South African Health Products Regulatory Authority (Sahpra) following a large trial that saw 7 000 South Africans test it last year.

Studies found the AstraZeneca vaccine is only 22% effective in protecting against mild to moderate cases of the Covid-19 variant.

But the Johnson & Johnson vaccine provides 57% protection against moderate to severe forms and is more effective against the new variant.

Another advantage of the Johnson & Johnson vaccine is that only one dose is required, according to Professor Salim

‘My husband called and said, “You’re trending. You’re on the TV!” ’

Abdool Karim, chair of the ministerial advisory committee on Covid-19.

“If we choose a vaccine that requires recipients to receive two doses, that will double the cost because we’ve got to buy twice as many vaccines,” says.

“If you have a single dose, you need half the medical-care infrastructure.”

For healthcare workers such as Zoliswa, the vaccine is a light at the end of a dark tunnel. Like many hospitals around the country, Khayelitsha District Hospital reached its capacity during the festive season – putting extreme pressure on its healthcare workers. At the height of the second wave, the hospital was at 140% capacity.

“There was a spike in trauma-related cases and it was all so tragic. Seeing a shortage of beds, families losing their loved ones . . . It was all so sad,” Zoliswa says.

“Being a nurse during this time is hard. Our experience as frontline workers hasn’t been good at all – the coronavirus has affected us emotionally, spiritually and physically. “We’re drained, we’re tired.” Prayer and a passion to help others keeps Zoliswa going. “I just tell myself people are depending on us so let me go there and do my duty,” she says. “We’re their only hope now.”

HER children, Sivenathi (22), Anomtha (12) and Luyolo (10), are the reason she volunteered to take the vaccine.

“I admit I was a little scared at first but when they told us they’d be doing a study on the Johnson & Johnson vaccine I put my name forward,” Zoliswa says. “I knew it was the right thing to do.”

In the 12 years she’s worked as a nurse, she hasn’t seen anything as terrifying as the Covid-19 outbreak. “I lost my aunt to the virus in July last year just three days after she was admitted to hospital – that made me realise just how serious this virus is,” she says.

Having seen first hand the effects of the disease, Zoliswa now feels better knowing she’s protected by the vaccine. She wants people to know it’s safe and encourages others to get the jab when it becomes available.

So far, more than 400 000 healthcare workers have registered on the government’s electronic vaccination data system to receive the vaccine at the 18 vaccination sites identified across the country.

SA has secured nine million doses of the Johnson & Johnson vaccine and at the time of going to print, more than 15 000 healthcare workers had been vaccinated.

The government has said it will take 12 weeks to vaccinate the remaining healthcare workers and for Zoliswa, the weeks can’t roll by fast enough.

“Being able to save lives and assist people is what we frontline workers live for,” she says.