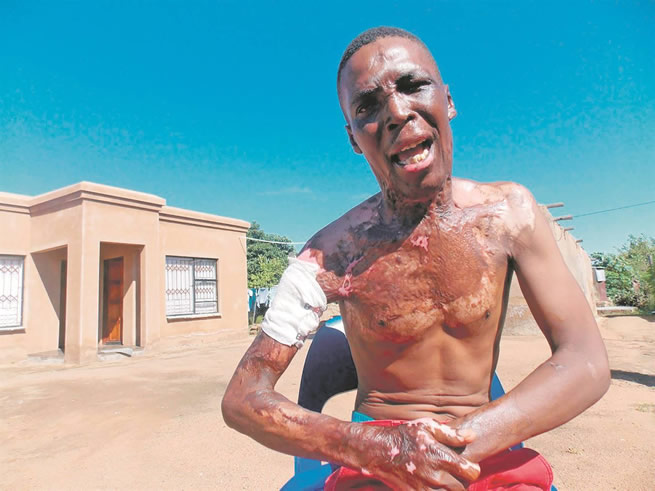 Simon was rushed to hospital in great pain caused by massive burns all over his body.

But while he’s no longer in hospital, his pain is worse than ever.

SIMON’S BALLS HAVE DISAPPEARED AND HIS penis HAS STOPPED WORKING!

Simon Marumo (42) from Winterveldt, Tshwane, said he went to George Mukhari Academic Hospital in Ga-Rankuwa after he got burnt by a paraffin stove while cooking, injuring his face and chest.

He didn’t think not having balls was a problem because he thought it was the medication.

“I stayed in hospital for almost three months and didn’t notice my penis had stopped working,” he said.

When he got home in December he realised he couldn’t get an erection when he was with his girlfriend.

“I tried for days, but it wouldn’t work so I went back to hospital,” he said.
“The doctors told me that during the operation on my burn wounds they put a drip inside my penis and forgot it there. They had to operate again to remove it.”

He wondered why they hadn’t told him this before. He noticed his right leg wasn’t working properly, either.

“My girlfriend has dumped me because I’m depressed all the time and she couldn’t take it anymore,” he said.

The former taxi driver blamed the hospital for his suffering.

His ex, Martha Sithole (29), said she left Simon because his bad temper had made things difficult for her.

“I needed to give him space to deal with his penis issue,” she said.

Simon’s sister, Julia Marumo (41), said: “I wish my brother can get proper medication so he can heal.”

Gauteng health spokeswoman Kwara Kekana said Simon was admitted at the hospital with 37% burns all over his body.

One area identified to insert a catheter was his right femoral vein, located in the upper thigh, in order to deliver medication and fluids to his body.

“The patient’s documents don’t report any complications after that,” she said.

She said Marumo was seen by a number of healthcare professionals while at the hospital.

“He’s welcome to visit the hospital if he ever needs further healthcare assistance,” she said.