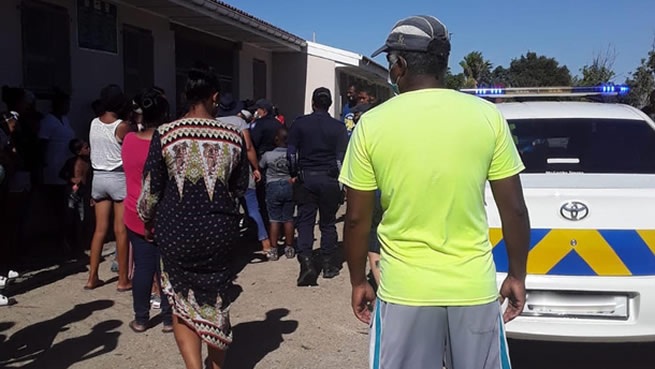 A Manenberg teenage girl has been left traumatised after she was attacked by two perverts who sexually assaulted her at a public pool.

Tempers flared at Manenberg Swimming Pool on Saturday after the 14-year-old ran home to tell her grandparents that the two males, one a 17-year-old, had masturbated on her in the water.

Her 51-year-old ouma explains: “She went to the pool with her friend because it was hot and it happened just before 4pm around closing time.

“She came home and told us there were two guys and they came towards her while she was in the water.

“She said she tried to get out, but then this 17-year-old boy grabbed her and started rubbing her genitals.”

The ouma says an older man also started groping her as she tried to get them to stop.

“The older one started grabbing on her and also rubbed up against her and touched her genitals. He even ejaculated in the water and when they stopped she got out and ran home,” she says.

“We were in shock and ran straight to the pool, but the older guy had left.

“Law Enforcement was called and they took the young boy away, but we don’t know what happened at the police station.”

The ouma says the girl has been left humiliated after children started poking fun at her.

“They are saying ugly things to her, but these guys nearly raped her. The people outside the pool were very angry, but the older guy was already gone.

“We will go back to the police station, but we have arranged trauma counselling for her first because this morning she just looked at me and burst into tears.”

Manenberg SAPS commander Brigadier Sanele Zama says cops are looking into the case although the girl has not laid a charge.

Mayco member for Community Services Zahid Badroodien says he was informed of the case and says the matter is under investigation.

“The staff responded when informed of what transpired as the girl had left the facility and had gone home,” he says.

“We are shocked at this and will look into banning those accused from the facility in future.”