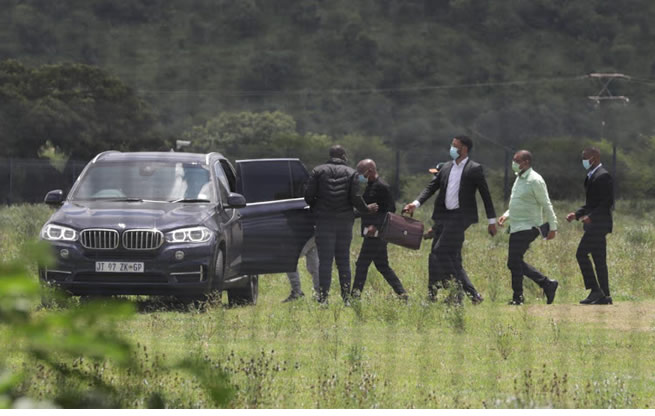 THE ANC in Kwazulu-natal says that it will meet former president Jacob Zuma this week to understand the basis of having a tea meeting with EFF leader Julius Malema “in the current environment”.

The much-hyped meeting between the leader of the EFF and the former ANC and state president, who have been in a love-hate-love relationship, was the biggest news of the week after Malema took to Twitter to request the meeting with Zuma.

It comes on the back of the see-saw battle between the 78-year-old former head of state, the Zondo Commission, and now, the Constitutional Court.

In a letter, Zuma blatantly defied to adhere to the Constitutional Court’s judgment ordering him to appear before the Judicial Commission of Inquiry into allegations of State Capture headed by Deputy Chief Justice Raymond Zondo – from February 15.

The travelling party spent almost five hours inside the compound before they emerged and left without saying a word.

Malema did not address the media but dispatched his spokesperson Vuyani Pambo who was also not forthcoming about the details of what turned out to be a clandestine meeting.

“We were invited because he was going to visit me at my home in umlazi on Wednesday, but was tied up in meetings, so he called us to his home. The time will come when the full truth of the meeting will be revealed, but for now, all that needs to be known is that Zuma won.

“There was a fear that following the tea, he would change his mind about testifying at the commission, but the old man is wise and strong and sent them packing. After that tea, he was as strong as he was the last time I visited him in Nkandla on January 4,” said Khanyile.

“In speaking with the old man, we know the Constitutional Court ruling took away his right to remain silent, and once you take away one’s right, it starts to become a slippery slope. The judiciary must remain fair and impartial, but that cannot be the case as long deputy chief justice Raymond Zondo presides. It was presented in black and white that there was a conflict between Zondo and Zuma, and if he had integrity, he would recuse himself. What can he do that other judges cannot? You can call me a prophet, but no one will be arrested as an outcome of the commission.”

Mdumiseni Ntuli, ANC provincial secretary in KZN, said they were not privy to the reasons “for what is called the tea meeting” as the party’s provincial leaders were yet to have a word with Zuma.

“It would be premature for us to have an informed view of the matter without understanding the basis of having that tea meeting in the current environment. We’ll be seeing him (Zuma) between now and the end of this coming week, and surely we will get to understand the context of the tea meeting and the purpose for which it was arranged,” Ntuli said.

“The date which he is expected to appear before the commission is yet to come, so it would be premature to make a bold statement that he has defied the Constitutional Court. What we know is that he has taken a posture that is intending to disregard the directive of the court.

“Whether that will ultimately happen between now and the date at which he is due to appear before the commission is a matter that will be a function of processes in time,” Ntuli said.

Family spokesperson Edward Zuma said a statement would be released.