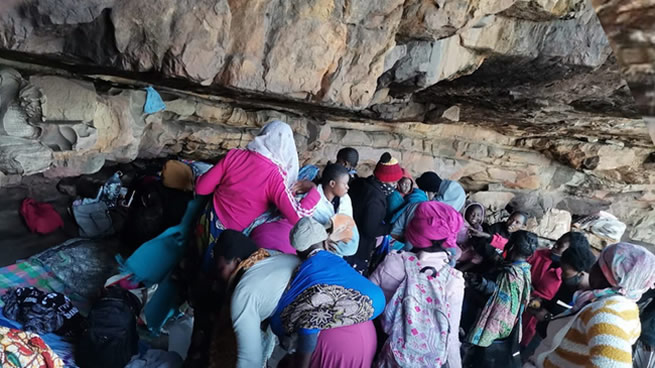 A group of worshippers spent Saturday night in police holding cells after they were nabbed for hosting secret church services in a cave in the mountains in Muizenberg.

According to a source, the group of 50 people were so excited that they continued the service in jail and even prayed for cops.

The source says the group has been the subject of complaints for several months during the lockdown, as they allegedly hold all-night church services, making geraas despite these gatherings being prohibited under the Disaster Management Act.

Their activities came to an abrupt end on Saturday night when SanParks rangers and Muizenberg Police pounced, arresting the group for trespassing and breaking Covid-19 regulations.

“They come from Delft, Philippi and all over and every weekend they camp out in the caves where they host these services,” says the source.

“They sing and dance the whole night and have been the source of many complaints from residents, as hosting church services was forbidden under the lockdown regulations.

“On Saturday SanParks rangers and Muizenberg Police arrived to find more than 50 people, including children, and the entire group was arrested.”

According to the source, the worshippers have not indicated which church they belong to and it is unclear who is arranging the services each weekend.

“If you ask them, they say they are just worshippers and it's not like they have a leader or a pastor. But they make fires and cook and do everything in those caves.

“They know that church services are prohibited but still go ahead.

“They were taken to the holding cells at Muizenberg SAPS on Saturday night and spent the whole night having kerkdiens in the cells and even prayed for the police.’

Police spokesperson Captain FC van Wyk confirms the arrests and says: “This office can confirm that 50 people between the ages of 20 and 57 which included 32 women and 18 males were arrested on Saturday night at about 11.05pm on charges of trespassing and Disaster Management Act.

“After being processed they were warned to appear in the Muizenberg Magistrates’ Court on 11 February.”

“The complaints consist of noise disturbance, illegal fires being made which could potentially lead to devastating wildfires, littering and vegetation trampling.

“The Protected Areas Act is clear that no one is supposed to be in the area after sunset and before sunset, no illegal fires allowed to be made as fires are only permitted in designated fires areas. No one may camp in the area without management authorisation.”

She says after numerous failed attempts to get the groups to obey the law, including issuing warnings and fines, SAPS approached Table Mountain National Park to perform the joint operation.