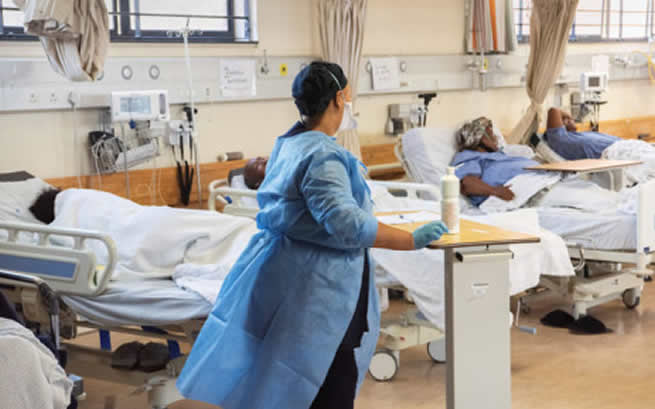 In one night, 12 Covid patients were admitted and seven of them were certified dead within 12 hours

“It’s sad to see patients die, knowing that there was something that could be done to save their lives.” These are the words of a doctor based at Mankweng hospital in Polokwane, Limpopo.

The doctor, who did not want to be named for fear of being victimised, said patients were dying at a high rate from Covid-19 complications.

“Sometimes I just feel like going to a GP and getting a sick note just so I can stay home for two to three days to help me deal with the different emotions inside me. But I can't do that because I need to be there for the patients and do the best I can to save those that can be saved,” the doctor told TimesLIVE.

“It’s so traumatising to see people die. People that you know with the right resources could be saved. One can only get comfort knowing that they did everything possible to save a patient but they could not make it. Unfortunately, I can’t say the same on the deaths we are now seeing,” the doctor said.

The doctor identified the shortage of ICU beds as the main contributing factor to the many deaths they have seen at the hospital. Referral to other hospitals was not possible as the doctor said there were no ICU beds in any Limpopo hospitals.

The doctor, who said he has been practising for more than five years, said they had never seen patients die at such a rate.

“It’s traumatising. You admit a patient and within 12 hours they are dead. It’s really painful to witness. As a medical officer, I have never seen so many people die at a time,” the doctor said.

In one night, the doctor said, 12 Covid-19 patients were admitted and seven of them were certified dead within 12 hours. “These are patients who needed ICU but there was none available and they simply didn’t make it.”

“On one night, I found every cubicle in the ward with deceased patients who were waiting for the mortuary to fetch them.”

Obese patients with comorbidities accounted for the most deaths, he said.

The shortage of PPE was another challenge. The doctor alleges they were given only five N95 masks to use monthly, meaning they have to reuse the mask.

“You use one mask per week and only change it if you dealt with a positive Covid-19 patient.”

The Limpopo department of health has been approached for comment. This story will be updated.

On January 1, Limpopo health MEC Dr Phophi Ramathuba tweeted: “We are starting to feel the affect of family Christmas lunches in our facilities. Unfortunately compared to July first wave this time around people don't just test positive but they are also presenting with severe symptoms warranting admissions.”