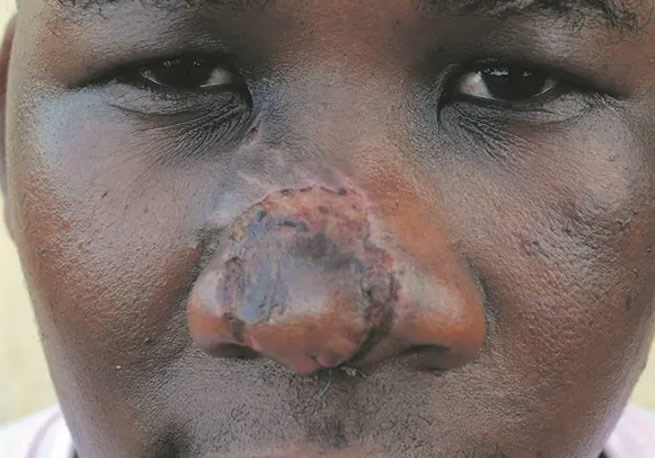 A South African man is nursing a damaged nose after her girlfriend tried to bite it off accusing him of being a horrible dad.

Kgaogelo’s girlfriend threw him to the ground and jumped on top of him.

BUT HE NEVER THOUGHT SHE WOULD TRY TO BITE OFF HIS NOSE! 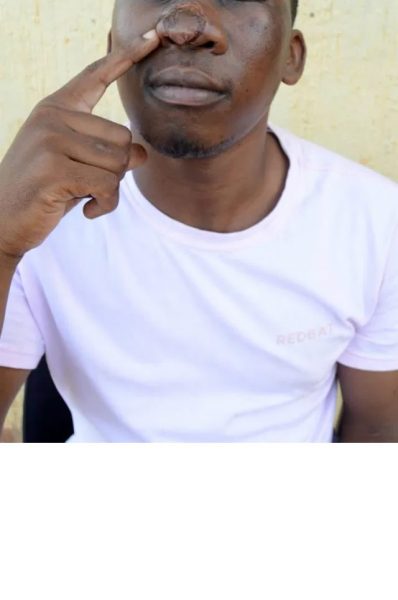 And to add insult to injury, the officers laughed at him when Kgaogelo Tshigeng (29) went to the cop shop to open a case!
He told Daily Sun when he tried to get help at Phokeng Police Station, near Rustenburg in North West, he was shamed and ridiculed.

The cops apparently laughed and refused to open a case after his lover almost bit off his nose on Saturday, 12 December.
He was chilling at a friend’s place when his 28-year-old lover came charging in and accused him of being a good-for-nothing dad.

Kgaogelo asked her to calm down but she got even angrier.

“The next thing I was on the ground and she was on top of me with her teeth on my nose,” he said.

“As she tried to pull back, I grabbed her and held her head close to my face. I was scared she’d bite my nose off.

“I screamed for someone to hold her neck and she released her teeth and ran away.”
Kgaogelo wanted her to be arrested.

“If it was the other way around, the cops would have helped her and I’d be in jail. She also stole my clothes,” he said.

He told the SunTeam he supports his child, and that the girlfriend is just possessive.

“What the police officers did was wrong. There aren’t enough centres to help male victims. We’re the only centre in North West taking them in,” she said.

Councillor Olga Chauke was furious that police refused to help a victim, saying people needed to accept that men do get abused.

Brigadier Sabata Mokgwabone said the matter was being investigated.

“It depends on the agreement between the officer and complainant on whether to open a case before or after the J88 form has been filled in by a doctor,” he said.