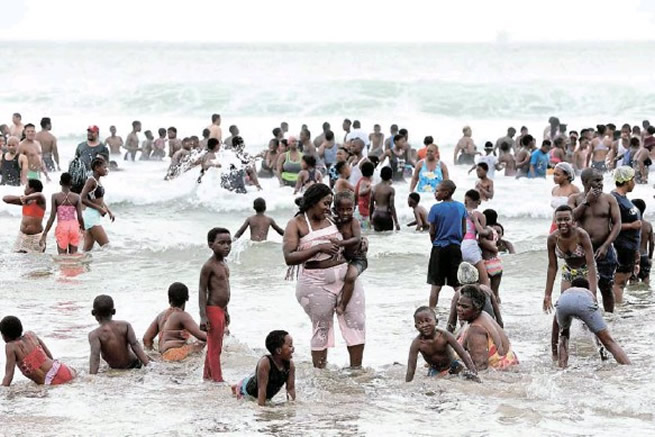 The government is racing against time to control the second wave of Covid-19 infections during the festive season as fears grow that the situation could get out of hand.

With the festive season officially kicking off on Wednesday, provinces that have seen a spike in infections are scurrying to mitigate the spread.

As thousands of people are expected to travel to coastal provinces, provincial governments and municipalities are discussing measures to control the spread of the virus while welcoming travellers who will boost local businesses.

In the Eastern Cape, premier Oscar Mabuyane sent a letter to cooperative governance and traditional affairs minister Nkosazana DlaminiZuma informing her that he had engaged mayors from coastal cities and that they had agreed to close beaches for the upcoming festive season.

“This is done to minimise the mobility of people from high-risk areas to low-risk areas and vice versa as well as to avoid large crowds in those recreational spaces,” he said.

Eastern Cape has the highest number of deaths at 5,399.

“This will ensure that we prevent mass gatherings. We have agreed that homecoming celebrations will be suspended because of the large number of people who gather at these occasions, ” Gomba said.

KwaZulu-Natal premier Sihle Zikalala has announced that all major big events that normally take place over the festive season have been cancelled. Zikalala said indoor events will be restricted to just 100 people and picnic venues will be monitored by law enforcement agencies to ensure compliance with lockdown regulations.

Zikalala’s spokesperson, Lennox Mabaso, said the province still wants people to access the beaches as they are the biggest attraction, particularly Durban.

Unlike the Eastern Cape, Mabaso said they were not contemplating completely closing the beaches.

“We are considering opening the beaches only at certain hours with some restrictions. The other [option] is to allow people at the beaches but do away with swimming because it is difficult to control people while they are swimming,” Mabaso said.

He said they were also contemplating allowing revellers in small groups. He added that the decision, together with the proposal to ban alcohol from beaches, was being discussed with the National Coronavirus Command Council.

Gauteng, on the other hand, will face a different battle of receiving its citizens when they return from the holidays.

“If they have symptoms of Covid-19 they will be immediately isolated and tested for Covid-19. All contacts will be followed up rigidly for 14 days.

Those who tested positive will be followed up for 10 days,” she said. Kekana said persons under investigation can be accommodated at the Nasrec quarantine/isolation centre in Johannesburg.

“The cost of testing is carried by the government. People are also welcome to test privately at their own cost,” Kekana said.

Western Cape, which is among four provinces that account for most of the infections in the country, is also preparing for battle. As of yesterday, the province had a total of 152,212 Covid-19 cases.

Premier Alan Winde said he had submitted a plan to President Cyril Ramaphosa and health minister Zweli Mkhize on how the province was responding to the resurgence of the virus.

“I specifically asked for assistance with our enforcement activities, with additional resources being supplied to hotspots for this purpose. [There is] a reconsideration of the number of people being permitted to gather in hotspots, especially indoors, given that the virus spreads at gatherings and where there is poor ventilation. This must be done reasonably, based on scientific advice,” Winde said.

Professor Salim Abdool Karim said the country has to change its restrictions in relation to gatherings.

We can’t allow mass gatherings to continue in the current form given the rapid rise in cases. When you have very few active cases, if you have a gathering of 200, you have a very small chance that there is somebody infected in the audience.

“However, when you have a rise in cases, as you have now, even if you have 100 people, it is quite likely that you will get somebody infected in that group, ” he said.

On Saturday, SA recorded more than 7,800 new cases of Covid-19,, raising fears that the country was dealing with a resurgence of the virus.

The last update from the national health department placed the country ’ s total caseload at 852,965 while pushing the national death toll to 23,106.

Sunday newspapers reported that Ramaphosa had consulted all provincial premiers on how the government should respond to the second wave. A virtual cabinet meeting was scheduled for yesterday, after which an announcement was expected. The announcement had not been made at the time of publication.

Ramaphosa is expected to make an announcement tonight.