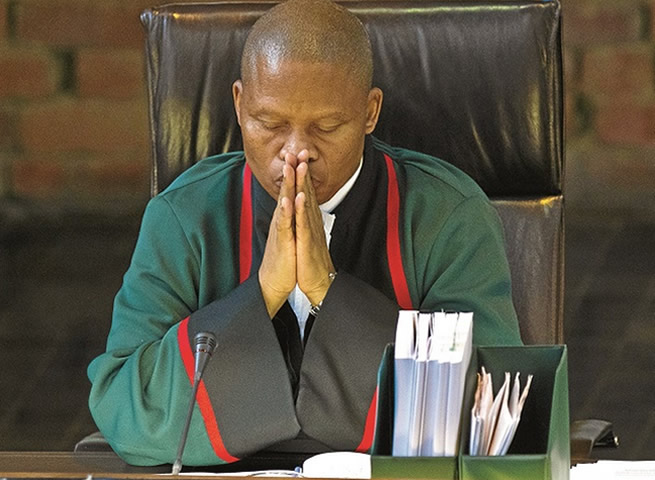 Chief Justice Mogoeng Mogoeng has courted another controversy, this time through a prayer which called for God to destroy any vaccine “meant to infuse the mark of the anti-christ symbol, 666 in the lives of people.”

“Whatever phase is set to be coming, Lord I judge it, I run it down in the name of Jesus. I lock out every demon of Covid-19. I lock out any vaccine that is not of you. If there be any vaccine that is of the devil meant to infuse 666 in the lives of people, meant to corrupt their DNA, any such vaccine, Lord God Almighty, may it be destroyed by fire.

Mogoeng, who has been open about his Christian beliefs, spoke at the thanksgiving ceremony to celebrate nurses and healthworkers held at the Tembisa hospital yesterday.

In his speech he commended healthworkers for their selfless efforts fighting Covid-19 in the country.

However, it was his closing prayer that raised a few eyebrows.

Mogoeng indicated that he no longer cared about criticism and told the organisers of the event to not worry about criticism that could come from him speaking at their gathering.

“If somebody puts you in trouble just say ‘ agh, it is Mogoeng,” he said.

Dr Lekopane Mogaladi, Tembisa hospital CEO said he did not want to comment on what could happen if people decided not to take a Covid-19 vaccine but said it was up to each individual to interpret the prayer.

“I am a believer. I don ’ t think it is a bad thing to pray to God and ask him for the country and the world to get a good vaccine. Aprayer is a prayer. It is a communication to God.

The Chief Justice was talking to God. I am not going to judge the Chief Justice ’ s prayer to God. He was praying for the country to get a good vaccine. He was not casting any aspersions on any vaccine that is there,” Mogaladi said.

There were, however, mixed reactions on twitter about Mogoeng ’ s prayer.

He is CJ (chief justice) of Concourt. As much as freedom of religion is guaranteed, he should consider his position and those who are from other faiths as a guardian on the apex court for all.” Another user @matteodupreez wrote: “So Chief Justice Mogoeng Mogoeng is spreading 666 conspiracy theories about the COVID vaccine?”

Others came out in defence of the chief justice. @NicAndersen said: “Mogoeng was NOT calling for ALL vaccines to be rejected. These comments were part of his prayer against any possibility of “devil ” or altering vaccines. Many are still concerned over his comments in terms of stoking fear around vaccine safety.”

Another user, @MvelaseP, added: “Mogoeng is not going to convince anyonewho was going to take the vaccine that they should not take it.

“Some people, hopefully most, will take it & others will refuse it. It ’ s unfair in any way to accuse or intimate that Mogoeng has anything to do with those choices.”

It is not the first time that Mogoeng brought controversy to his position. In June, he was slated by pro-Palestine campaigners, including the ANC, for expressing his love for Israel and criticising the ruling party on its approach to the Israel-Palestine conflict during awebinar hosted by the Jerusalem Post.

Mogoeng refused to apologise for his comments on Israel.