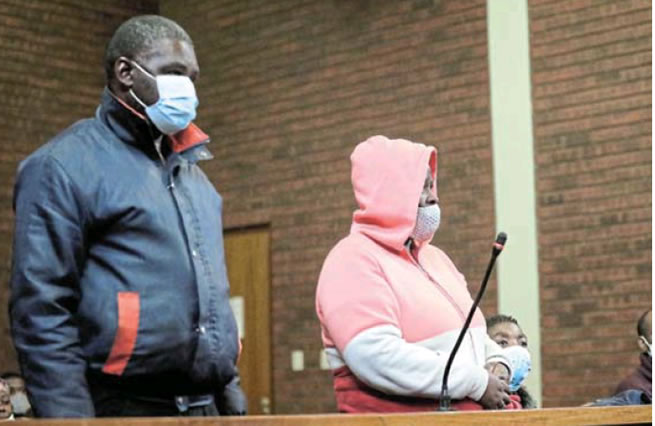 – Girl allegedly beaten up after she was reported to have kissed a boy; friends say couple often assaulted her

When Nthatisi Bembe, 12, was called to come home by her angry parents this week, none of her friends thought that would be the last time they will see her alive.

The girl was subjected to nearly 30 minutes of brutal sjambokking by her mother and her live-in lover at their home in Lehae, south of Johannesburg, on Tuesday. Just a few minutes after the assault, which was punishment over rumours that she was “seen kissing a boy in the street ”, Nthatisi was found dead on the bathroom floor where she had gone to wash off the blood that had covered her body.

Yesterday, her mother Miriam Bembe, 35, and her boyfriend Raymond Sekgapane, 42, made their first appearance at Lenasia regional court on a charge of murder.

Giving a summary of what led to the Lehae Primary School Grade 7 pupil’s death, prosecutor Tumelo Maunye said the girl’s beating was allegedly triggered by someone who told her parents that she had been seen kissing a boy.

“The parents got angry and called her to come home. For about 30 minutes, they beat her with a sjambok. She then went to the bathroom and moments later, they found her lying there, dead. It ’ s a complicated matter that can be solved by a postmortem,” Maunye told the court.

Magistrate Maggie van der Merwe agreed, before postponing the matter to next week for a bail hearing. “The postmortem will tell us if this was murder or a heart attack.

“This case is not about what we see with our eyes, it’s very complicated. She was allegedly beaten for kissing a boy and and now she is dead. The postmortem and other evidence will guide the police and the prosecutor on how we proceed. Unfortunately, I cannot make a decision right now.”

About 8km away from the court in Lehae, residents and Nthatisi ’ s friends were still gripped by shock when the media visited yesterday.

“’ Im angry. I ’ ve known Nthatisi for a fewyears but we were not close friends even though we went to the same school, Lehae primary. She was a normal girl who did normal things that other kids do. But her parents always beat her up… sometimes over little mistakes. They killed her for hugging a boy. She was not kissing him,” said a teen who lives in the area who cannot be named to protect her identity.

A neighbour who lives across the road from Nthatisi’s home said on the evening of the incident, nobody heard any ruckus coming from the house. “We just saw forensic vehicles coming to take evidence from the house in the morning. The father was taken in for questioning. I’ve known the couple for some time and they even have a younger child together,” the neighbour said.

In SA, beating your child is banned. The Constitutional Court made a ground-breaking ruling that upheld a high court judgment that effectively does away with the common law defence of reasonable chastisement when spanking a child in September last year.

In essence, this ruling abolished any forms of spanking of children and imposed harsh penalties. The ruling was met with mixed reactions, with some welcoming it, saying it is a step in the right direction to break the cycle of violence.